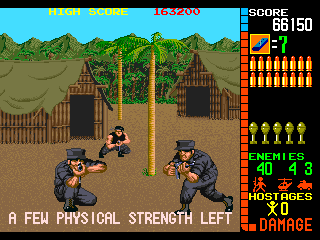 Operation Wolf is a shooter game developed by Taito Corporation and released in arcades in 1987; ports to numerous home computers and consoles followed shortly after. In the game players take on the role of a Special Forces operative with the goal of rescuing 5 hostages that are being held captive in a concentration camp.

Operation Wolf is a rail shooter broken up into 6 different stages. Players have a first-person viewpoint as the screen scrolls either right to left or left to right depending on the stage. To complete a stage, players need to shoot a required number of targets which include enemy troops, tanks, helicopters, boats, and an end of level boss. Enemies keep appearing until the required quota has been eliminated; enemies attack with guns, grenades, knives, missiles, and more. The only defense players have is to shoot attacks out of the air before they hit (gunfire is an exception which can't be blocked; players will instead have to quickly defeat the opponent who is shooting). Players have at their disposal a machine gun with limited ammunition and several grenades; the grenades cause more damage to a larger area, but are far more limited in supply. Replenishments for both can be found throughout the game; sometimes bonus ammunition can be found lying out in the open, but often it is hidden and revealed by shooting certain items such as crates, trees, or animals running in the background. A machine gun power-up is also

Each stage in Operation Wolf has a different objective and when successfully completed affects the gameplay on remaining stages. The 6 stages players need to complete are as follows:

The Japanese version and the English versions vary slightly; in the Japanese version, only the first 4 stages are available initially and players can choose them in any order (the jungle stage unlocks the concentration camp and the airport is unlocked after hostages are rescued from the concentration camp). In the English versions, players are unable to select the next stage and instead the stages always appear in the above order; this makes it less obvious what the effects of completing some of the stages are as players always proceed through the game in the same way.

Players begin the game with a limited amount of health indicated by a bar on the side of the screen; each time the player is hit by an enemy attack, health is drained a little. There are several types of friendly targets in the game too; if players accidentally shoot medical staff or civilians attempting to escape then some health is lost. It's possible to replenish health several ways; at the end of each stage (especially the village stage), some health is restored automatically. Throughout the stages health power-ups may appear (sometimes out in the open, or occasionally by shooting targets such as trees); shooting one of these power-ups also restores a small amount of health. If the health bar runs out completely, the game is over; the game also ends if players run out of both ammunition and grenades or lose all of the hostages on stages 5 and 6.

Product catalogs, magazines, flyers, or other documentation Operation Wolf has appeared in.
*Note: If you are unable to see any images in this section, you may have an ad blocker installed that is blocking the thumbnails and/or images.

This game has been tagged with the following features:
Copy Protection: Key Disk/Tape Customizable CGA Palette