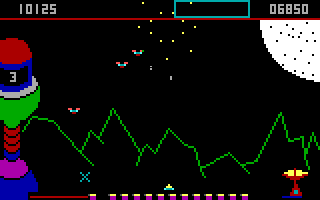 Moon Bugs for the IBM PC
Moon Bugs is an action game released by Windmill Software in 1983 for the IBM PC. In the game, players need to defend their uranium ore from attacking bug-like aliens.

Moon Bugs somewhat resembles a combination of the games Galaxian and Defender. Along the bottom of the screen are numerous drums of uranium ore. To the left of the screen is a space station which will begin loading the uranium at the start of each level. Only one drum is loaded at a time, so players need to defend the drums from attacking moon bugs until each drum can be loaded into the space station. The moon bugs fly seemingly randomly around the screen, frequently attacking the player. If the player is hit, a life is lost and the game ends when players have no remaining lives. From time to time, the moon bugs fly down and attempt to steal uranium; when they do, players have a short time to shoot the moon bug before it escapes. At the end of each level a bonus is awarded for each uranium drum saved and a point penalty for each one stolen.

In a Space Invaders like fashion, a UFO will occasionally fly across the top of the screen. A box in the upper right portion of the screen indicates what bonus will be awarded for shooting it; some of the time bonus points are awarded, other times players will be brought to the combat bonus round. In the combat round, players need to shoot an alien as many times as possible for points. The alien alternates between moving left and right each time it is shot. Additionallly, after each time it's shot it will speed up. If (or when!) the alien reaches a side of the screen the round is over.

Like several of Windmill Software's titles, Moon Bugs is one of a handfull of games to utilize CGA's 160x100 graphics mode to display 16 colors at once on an RGB monitor (in contrast to the more common 320x200 graphics mode which only allowed 4 colors at once). This "graphics" mode is actually a tweaked version of the 80-column text mode; the CGA registers are set to change the character cell height so only two of eight lines of each character are shown (providing 100 rows of text instead of the usual 25). By using ascii characters 221 and/or 222 (which look like vertical bars) each character essentially becomes 2 pixels providing the resolution of 160x100. 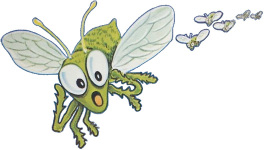 Product catalogs, magazines, flyers, or other documentation Moon Bugs has appeared in.
*Note: If you are unable to see any images in this section, you may have an ad blocker installed that is blocking the thumbnails and/or images.