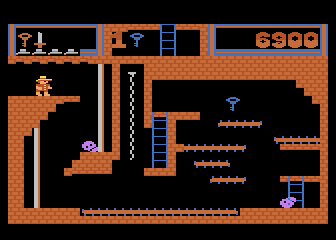 Atari 5200 version of Montezuma's Revenge
Montezuma's Revenge is an action/platform game first released by Parker Brothers in 1984. In the game, players control Panama Joe (also known as Pedro) with the goal of collecting treasures in a large pyramid. There are a total of nine levels, each of which consist of numerous rooms that are often filled with dangers ranging from deadly skulls to fire pits.

Montezuma's Revenge takes place in a pyramid consisting 99 rooms that are arranged into 10 floors (including the initial room players begin in). The goal on each level is to reach the treasure room located in the center of the bottom floor while collecting treasures for bonus points along the way. Most rooms in the pyramid have some sort of danger or obstacle players need to get past; this includes deadly laser gates that appear and disappear, fire pits, conveyor belts, disappearing floor sections, and dangerous killer creatures such as bouncing skulls, snakes, and spiders. Contact with any of the dangers causes players to lose a life; on easier levels, any of the creatures that cause a player to lose a life will disappear from the screen while on higher levels the creatures always remain. Additionally, players can lose a life if they fall too far off of a platform. The game ends when players have lost all of their lives. Points are earned in the game for eliminating the killer creatures, collecting treasures and special items, and opening doors. Players earn an extra life for every 10,000 points on levels 1-3 or for every 20,000 points on levels 4 and up.

To navigate through the rooms players can walk along the platforms, jump, climb up chains, slide down poles, and climb up or down ladders. Each room has a different layout frequently requiring a careful strategy to get through safely. Throughout the pyramid are various colored keys; some rooms have locked doors and players will not be able to open them unless they have picked up a key of the matching color. Some rooms (usually near the bottom of the pyramid) are dark; players can attempt to navigate in the dark, or the room can be lit if a torch is found. One exception is the last level where every room is dark and there are no torches.

While each of the nine levels take place in the same pyramid with the same room arrangement, there are some differences: Throughout the pyramid there are several types of bonus items that can be found and collected; some earn bonus points while others can be used to make safe passage through the pyramid easier. The types of items that can be found include the following: Players have limited room in their inventory; only 5 items at a time can be carried, once the inventory is full players will be unable to pick up additional items unless one being carried is used.

Due to limitations of the system, the Atari 2600 version of the game only includes 23 rooms instead of the full 99. Gameplay otherwise remains the same.

Product catalogs, magazines, flyers, or other documentation Montezuma's Revenge has appeared in.
*Note: If you are unable to see any images in this section, you may have an ad blocker installed that is blocking the thumbnails and/or images.