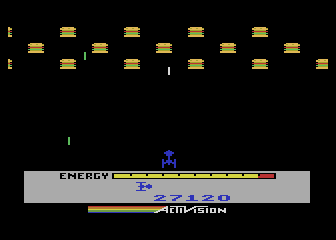 Atari 5200 version of MegaMania
MegaMania is an action game with many similarities to Space Invaders. It was first released by Activision for the Atari 2600 in 1982 and later ported to the Atari 5200 and Atari Home Computers.

As in Space Invaders, players control a space ship like blaster at the bottom of the screen which can move horizontally. Various types of invaders appear at the top of the screen and attack continuously. The goal of the game is to earn as many points as possible by shooting all of the incoming invaders. Each time a wave of invaders is destroyed, the game continues to the next, more difficult wave. Players begin the game with three blasters; each blaster has a limited amount of energy. As time passes the energy slowly reduces a little bit at a time, essentially providing a time limit for each level. When all energy is gone, the blaster is destroyed. Additionally, coming into contact with any of the invaders or their missiles destroyes the blaster; the game ends when players have no more blasters remaining.

Similar to many Activision games of the era, players could earn a patch for high scores in MegaMania. To earn the MegaManiacs patch, players could send a photo of their T.V. showing at least 45,000 points to Activision. 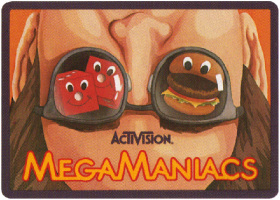 Product catalogs, magazines, flyers, or other documentation MegaMania has appeared in.
*Note: If you are unable to see any images in this section, you may have an ad blocker installed that is blocking the thumbnails and/or images.