Apple II version of Mating Zone
Mating Zone is an action game released by Datamost in 1983. It is an action/shooter style game with some similarities to games such as Demon Attack or Galaxian. In the game players need to defend from numerous hexagon, square, and circle shaped aliens. Initially, the aliens are harmless and remain at the top of the screen; however, when they meet in the mating zone (indicated by one or more clouds on the screen) they become deadly!

Players control a bow at the bottom of the screen which can move left and right only; for defense, the bow has the ability to fire arrows. At the top of the screen there are one or more cloud-shaped areas which are the mating zones. Aliens appear from the left and right sides of the screen and move towards these zones; at this point the aliens are harmless. However, once two aliens meet in one of the mating zones, they begin attacking the player and will head towards the bottom of the screen. If the aliens reach the bottom of the screen, they produce an offspring which also attacks. Players can shoot the aliens with their bow by firing arrows. No points are earned for destroying aliens before they mate, and 10-50 points are earned for shooting aliens after they mate. Occasionally, if two aliens of different shapes meet they may turn into an egg; points are earned for shooting the egg, but if players wait too long the egg hatches with the pieces of the shattered egg being deadly.

Each round in the game features 15 aliens with several of each type; the first round has only one mating zone, while subsequent rounds have two or more. Players start the game with three bows; the game ends when all of the bows have been destroyed by aliens. 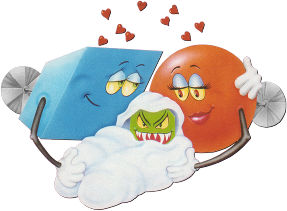