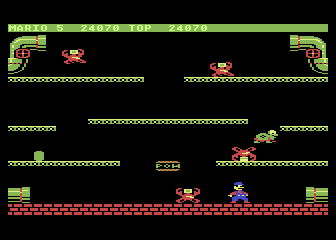 Atari 5200 version of Mario Bros.
Mario Bros. is a platform action game first released in arcades by Nintendo in 1983. It was subsequently ported to numerous home computers and game consoles and has been re-released in various forms for modern systems as well. In the game, players need to get rid of the numerous pests that crawl out of the pipes. The game allows two players to play at the same time as the Italian-American plumbers Mario and Luigi (it was the first game to introduce Luigi with Mario having a previous appearance in Donkey Kong). While Mario Bros. was only a moderate success, it would eventually spawn numerous sequels and become one of Nintendo's best known franchises.

In Mario Bros. players need to eliminate all of the pests that appear in order to proceed to the next level. The game screen consists of a series of platforms with pipes at the top left and right and bottom left and right of the screen. Pests appear from the pipes at the top of the screen and continue walking until they reach a pipe at the bottom; once the pest enters the pipe it will reappear at the top of the screen again. Players have no direct way to eliminate pests; to get rid of them takes two steps. First, the pest needs to be knocked over by jumping up and hitting the floor beneath it. Once the pest is on its back, players can kick it off of the platform. If players aren't quick enough, pests will flip themselves back over after a short period of time; once this happens, they change color and begin walking faster.

To help players out, there is a 'POW' switch located in the center of the screen. If players jump and hit the 'POW' then every pest on the screen will be flipped and all fireballs eliminated. Players may still need to be careful, however; if any pests are already flipped upside down at the time the 'POW' is hit, those pests will be flipped back to right side up and continue walking. The 'POW' switch is limited to three uses before it disappears, however it will reappear again after each bonus stage.

There are several different types of pests that appear as the game progresses. The pests encountered are as follows: The game starts with just the shellcreepers, then as levels are completed additional opponents appear one at a time until all of pests are encountered. The one exception is the fireballs which appear on every level (though in some home versions of the game, easier difficulty levels are available where fireballs don't appear initialy if at all).

Points are earned in the game for flipping over pests, kicking pests off of the platform, eliminating fireballs, and collecting bonus coins. The coins can be found in two ways: for each pest (except the last one on a level) that is kicked off of the platform, a coin appears from one of the pipes. Additionally, every couple of levels there is a bonus stage; there are no opponents, and floating throughout the screen are coins. Players have a limited time limit to attempt to collect all of the coins for bonus points.

This game has been tagged with the following features:
Copy Protection: Key Disk/Tape Arcade Classics Series