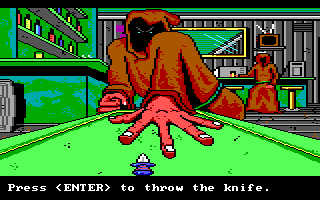 Manhunter: New York is a post-apocalyptic adventure game released by Sierra On-Line in 1988. The game takes place in 2004 (at the time, in the future) when an alien invasion has enslaved humanity. Players take on the role of a Manhunter, a detective tasked with monitoring human activities and tracking down criminals. A sequel, Manhunter 2: San Francisco, was released the following year.

The story in Manhunter: New York begins in the year 2002 when the Orb Allliance invades Earth and enslaves humanity. The orbs, which resemble giant eyeballs, carefully control the remaining humans; only brown monk robes are allowed to be worn, speaking is prohibited, and a tracking chip is implanted to monitor every move. The player's character is a nameless manhunter, a human who has to act as a police officer of sorts by monitoring other humans and tracking down and capturing criminals. The game begins in 2004 in the damaged remains of New York City; the player is initially a rookie and tasked with solving a simple murder case which eventually expands to locating fellow humans believed to be forming an underground resistance. As the story progresses, it's revealed the orbs are using humans as a food source and the player will need to find a way to switch sides and overthrow the orbs without being detected as a traitor.

Manhunter: New York uses a modified version of Sierra's AGI interpreter; the game, however, is quite different from Sierra's other AGI games. Instead of using a 3rd person view and a parser with typed commands, the game utilizes a 1st person view for most screens (action sequences and a few cutscenes excluded) along with a simple point-and-click interface in order to explore scenes, collect clues, and more. Since humans in the game aren't allowed to communicate with each other, dialog throughout is minimal; most of the clues, puzzles, and the storyline are presented by the game's visuals instead of text. The visuals in Manhunter feature real New York City locations and are often grittier and gorier than was typical for Sierra adventure games.

The storyline spans several days as the case unfolds. At the start of each day an orb arrives and provides the player's assignment; At the end of each day players need to report their findings and correctly identify the suspect. To help out, all Manhunters are provided a computer (called the Manhunter Assignment Device, or "MAD") which includes a map of the city, provides information, and allows the ability to view people's location. Knowing the place and time of an event, players can use the computer to playback that timeframe to see who was present and where they went which can potentially provide clues. By selecting a building or location on the map, players are brought to that location and can explore. While exploring, icons allow players to move in different directions, examine something of interest closer, and take or use objects.

As was common with Sierra adventure games of the era, players will likely have their character die often. The world of Manhunter is dangerous with many unfriendly characters, environmental hazards, and several action sequences. Unlike other AGI games, Manhunter allows players to immediately go back to just before their death without having to restore a saved game and the game designers themselves will also appear to offer some hints. It is still possible, of course, to save games progress so players can resume at a later time.

Product catalogs, magazines, flyers, or other documentation Manhunter: New York has appeared in.
*Note: If you are unable to see any images in this section, you may have an ad blocker installed that is blocking the thumbnails and/or images.