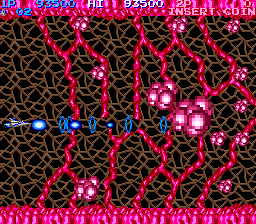 Arcade version of Life Force
Life Force (originally titled Salamander in Japan as well as in Europe) is an action game released by Konami Industry Co. in arcades in 1986; it was later ported to several home systems including the Commodore 64, Nintendo Entertainment System, and more. The game is a spin-off of Gradius and features similar gameplay while adding the ability for two players to play at once, a new power-up system, and both horizontally and vertically scrolling stages. A sequel, Salamander 2, was released in 1996.

Life Force is a shooter where 1 or 2 players control a futuristic spacecraft (player 1 the Vic Viper, and player 2 the Lord British). In each of 6 stages in the game players need to survive by shooting opponents and avoid crashing into indestructible objects and walls before finally reaching a large boss at the end of each stage. The stages and hazards in Life Force have a bio-mechanical theme with the stage appearance and many enemies resembling organic components such as cells, bacteria, and more. The U.S. arcade release of Life Force further elaborated on the theme by including additional text during the attract mode which provided the background story of a large, bio-mechanical life form which has been infected and needs to be saved.

When the game starts, players have limited fire power and can only shoot a relatively weak shot forward. By destroying certain enemies (or groups of enemies) a power-up capsule is left behind which can be picked up for additional weapons or abilities. Unlike the weapon selection system used in Gradius, Life Force has different capsules for each power-up and as soon as one is picked up it will automatically be equipped. The power-ups found are as follows: Any time a player loses a life all power-ups are lost. The one (possible) exception is the multiples — they will remain stationary at the same location the player's ship was destroyed at potentially providing the opportunity for the player to pick them up again before they scroll off of the screen.

The arcade version of Life Force was released in Japan, North America, and Europe and was also ported to numerous computers and game consoles in these same regions; while the overall theme and gameplay is the same in all of the versions, there are some variations when comparing releases in different regions or for different systems.

In the original Japanese arcade version, many of the levels have a simple starfield background; the North American arcade release continued the biological theme further and replaced these backgrounds with a more elaborate organic looking pattern. In addition to the background changes the attract mode was also updated to describe the back story further. The game was then re-released in Japan (as Life Force this time) which continued the biological theme still further with new backgrounds and scenery and also changed the power-up system to resemble the one used in Gradius.

The home computer and console versions feature a number of variations when compared to the arcade version, mostly due to hardware limitations. Depending on the platform, some levels are missing and the total number of option power ups is limited to 2 or 3 instead of 4. Some changes are more cosmetic, most notably in the NES version which alters some end of level bosses, rearranges the levels, and adds new levels unique to the NES which replace some original ones.

Product catalogs, magazines, flyers, or other documentation Life Force has appeared in.
*Note: If you are unable to see any images in this section, you may have an ad blocker installed that is blocking the thumbnails and/or images.