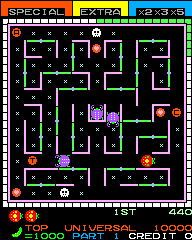 Arcade version of Lady Bug
Lady Bug is an action game originally released in arcades in 1981 by Universal Co., Ltd. and subsequently ported to several home game consoles by Coleco. The game has some similarities to Pac-Man while adding a few variations. Like Pac-Man, the goal of Lady Bug is to eat all of the flowers in a maze (which are shaped like X's) while avoiding opponents.

Like Pac-Man, Lady Bug features a top down view of a maze. Players control the lady bug with the goal of eating all of the flowers (represented with X's) in the maze. The maze consists of some walls that are unmoveable as well as some sections that can be moved by the lady bug only. When the lady bug goes through a moveable wall, the entire section rotates in the direction it is pushed. By realigning walls, players can create temporary shelter for the lady bug. Since, unlike in games like Pac-Man, there is no power up to allow players safety from enemies, using the walls to escape trouble can be crucial.

Chasing the lady bug are a variety of different insects; each time lady bug is caught, a life is lost and the game ends when no more lives remain. On each level the enemy insects begin in the center of the maze; along the border of the maze is a wall that changes colors acting as a timer. When the timer runs out, one insect leaves the center of the maze and starts chasing the lady bug. This continues until all insects have been released. As the game progresses, the timer becomes quicker which releases the insects faster. In addition to the insects, there are also skulls located randomly in the maze. A life is lost if the player touches one of the skulls. If possible, players can also lure an enemy insect into a skull which will destroy them as well.

In addition to the X's, the maze also has several other types of bonuses that can be collected. The first is letters; on each maze, there are two letters placed in the maze. Most of the time the letters are blue; occasionally, they cycle to yellow and then to red before changing back to blue. Letters earn bonus points when collected while blue; if yellow, additional points are earned and a letter to the word "EXTRA" is added — if the complete word "EXTRA" is spelled out, the current level is completed and players earn an extra lady bug. Letters collected while red can spell out the word "SPECIAL"; completing this word brings players to a special bonus round. Additionally there are blue hearts in the maze; eating a blue heart will cause points earned to double for the remainder of the maze; eating a second blue heart causes points to tripple. Lastly, each level features a different vegetable which awards bonus points when eaten. The vegetable appears in the center of the maze and can only be collected after all of the insects have been released. 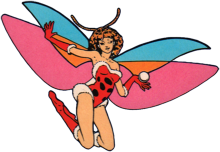 Product catalogs, magazines, flyers, or other documentation Lady Bug has appeared in.
*Note: If you are unable to see any images in this section, you may have an ad blocker installed that is blocking the thumbnails and/or images.