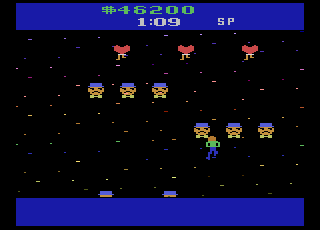 Players control each of the five members of the band one at a time; the goal is to navigate each member past the various obstacles on the vertically scrolling screen and reach the famous Scarab Escape vehicle (which was featured on the band's album 'Escape', released just prior to the game). Time is limited; if any of the band members fail to reach the target before time runs out, the game is over. Once all band members reach the escape vehicle, the game repeats.

Players begin the game with $50,000 which acts as sort of a score; when certain obstacles are hit money is lost. Additionally, hitting obstacles also slows the player down which can end up costing precious time. To help out, loyal roadies and the band manager also appear from time to time; if players run into any of these friendly characters, they are granted temporary invincibility and can run straight through any obstacles.

Characters that appear on the journey are as follows:

If any time remains after a band member reaches the escacpe vehicle, the leftover time is applied to the next band member. At the end of the level, extra time leftover earns extra cash plus an additional $50,000 is added to the player's score.

Product catalogs, magazines, flyers, or other documentation Journey Escape has appeared in.
*Note: If you are unable to see any images in this section, you may have an ad blocker installed that is blocking the thumbnails and/or images. 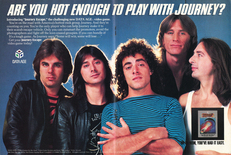