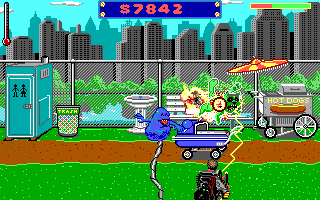 IBM EGA version of Ghostbusters II
Ghostbusters II is an action game developed by Dynamix and published by Activision in 1989. The game recreates several scenes from the movie of the same name and has players taking on the role of the four Ghostbusters attempting to save New York City from the spirit of Vigo, a 16th century tyrant who has returned to bring destruction to the city. There is a limited amount of time to complete the task, as Vigo will return to full power at midnight on New Year's Eve.

Following the heroic efforts of the Ghostbusters in the first movie (and game), the city of New York has been ungrateful and slapped fines on the Ghostbusters for the destruction they caused. Meanwhile, however, a river of slime is filling an abandoned transit tunnel and heading towards the Manhattan Museum of Art; inside the museum, the spirit of Vigo the Carpathian is trapped inside a painting, waiting to emerge. The slime underneath the city is "mood slime"; it reacts to emotions, and is collecting all of the negativity of the city to restore Vigo's power. The good news is the slime can react to positive emotions too; to stop Vigo, the Ghostbusters need to collect a large quantity of slime, turn it positive, and travel to the museum and use it against Vigo, all before New Year's Eve.

The game is broken up into different types of action sequences inspired by the Ghostbusters II movie. For most of the game players begin in the Ghostbusters lab where clicking on different areas of the screen will begin one of the action sequences or perform lab experiments. There are two main goals from the lab screen: to collect enough slime and turn it positive, and to earn enough money to purchase the slime blower.

The Courtroom
Before players make it to the lab, the game begins in a courtroom; during the Ghostbusters' trial, the ghosts of the Scoleri Brothers appear and players need to capture them. In this first scene, if players successfully capture the two ghosts a $10,000 fine is waved and players start with a $0 balance. If unsuccessful, the game begins with players $10,000 in the hole making the rest of the game harder.

Busting Ghosts
The ghost busting scenes in the game have the currently active Ghostbuster at the bottom of the screen moving left or right with the ghost(s) moving around near the top. Players need to drain the ghosts energy by hitting it with the proton pack. When the ghosts energy runs out, it will be automatically caught in a trap. There are two dangers player's need to dodge when catching ghosts: the ghost itself will shoot fireballs at the player — after three hits, the ghostbuster is sent to Parkview. Additionally, the green slimer ghost pops up randomly and throws slime at the player — it takes six hits from the slime and again the Ghostbuster is sent to Parkview. Money is earned for successfully capturing ghosts, however any damage to property in the process will cost some money.

Collecting Slime
When players need more slime for experimenting, it can be found in the abandoned Van Horne Station. Players will be hanging on to a rope and can climb up or down and swing left and right. Using a scoop the slime at the bottom of the station can be collected into a vial. From the river of slime a ghostly hand will occasionally reach up and attempt to capture the Ghostbuster; if caught, players can try to break free, though the hand becomes stronger as the game progresses. Other ghouls and ghosts also fly by from time to time and attempt to knock the player off of the rope. Should one of the ghosts succeed, the Ghostbuster is sent to Parkview.

Parkview Mental Hospital
Anytime a Ghostbuster fails at a task, he is thrown in Parkview Mental Hospital. If all four Ghostbusters end up in Parkview, the game is over. However, as long as players have at least one Ghostbuster remaining they can attempt to rescue the others. When attempting a rescue, players begin at the top of the Parkview building and climb down a rope; it's not known which room(s) the Ghostbusters are held in, however in some windows a shadow can be seen. The shadow could be a Parkview orderly, however; the only way to find out if it's friend or foe is to enter the room by smashing the window. If it's not another Ghostbuster in the room, players need to dodge capture before continuing the climb down otherwise that Ghostbuster will also be trapped in Parkview. 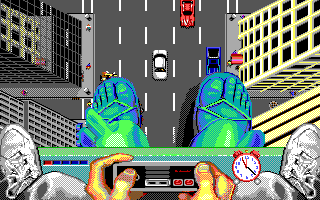 Statue of Liberty sequence (EGA)
The Statue of Liberty
Once players have collected enough of the positive slime and obtained the slime blower, the Ghostbusters can use them to bring the Statue of Liberty to life and have it walk just just long enough to reach the museum. To do so, players can alternately move the statue's feet to walk forward (while being careful not to crush any cars on the road!) and turn left or right at intersections (a map included with the game helps players know which way to go). If players don't make it to the museum before time runs out or don't have enough positive slime and the statue can no longer walk the game ends.

Final Showdown with Vigo the Carpathian
In the final stage of the game, players finally face Vigo; this section is similar to previous ghostbusting parts of the game, however Vigo is much tougher than typical ghosts with a single hit from his fire taking a Ghostbuster out of commission. Successfully defeating Vigo wins the game.

Product catalogs, magazines, flyers, or other documentation Ghostbusters II has appeared in.
*Note: If you are unable to see any images in this section, you may have an ad blocker installed that is blocking the thumbnails and/or images.