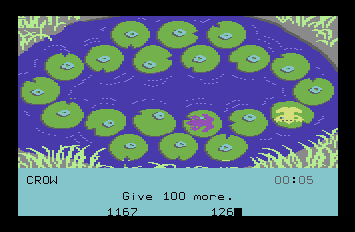 Commodore 64 version of Frog Jump
Frog Jump is an educational game designed for children ages 5-8 to help practice counting and ordering numbers. The game can be played by one or two players; in the one player version, the goal is to win 20 lily pads in the shortest amount of time possible. For two player games, the goal is to be the first player to win 20 lily pads. The game ends once the goal is reached. Several difficulty levels are included which affects how many digits are in the given numbers.

During the game, a series of lily pads are displayed on the screen arranged in a circular pattern with each players frog sitting on one of the pads. On each turn, players are presented a mathematical question; The types of questions asked are addition and subtraction problems — the computer will provide a number, and then ask a value to be added or removed from the given number (for example, the number 700 could be shown with the prompt 'Give 100 more'). A correct answer causes the players frog to advance around the lily pads by one or more jumps (this awards lily pads to the player). If an incorrect answer is given, the player is given a second chance; if two incorrect answers are give or the player takes longer than 45 seconds to answer, then the players frog remains on the same lily pad it was on and no lily pads are awarded to the player. The number of lily pads awarded and how far the frog jumps depends on how fast the question is answered: 1-2 seconds awards 3 lily pads, 3-5 seconds awards 2, and 6-45 seconds awards 1. If the first answer provided was wrong and the second one correct, the time taken for both answers is added together to determine the time used for awarding the lily pads.

In addition to multiple difficulty levels, the game provides a few minimal customizations for players by allowing them to enter their name and select a color for their frog.