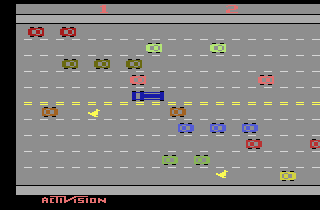 Freeway is an action game for two players released by Activision for the Atari 2600 in 1981. The goal of the game is to help the chicken cross the road! The game screen consists of a 10 lane highway; two chickens begin at the bottom of the screen and need to reach the top by crossing the freeway without being hit by cars. If a chicken is hit by a car, players will temporarily lose control and the chicken is knocked a short distance backwards. Reaching the top earns one point and the chicken begins again at the bottom. The game lasts for 2 minutes and 16 seconds, and whichever player earns more points in that time wins. One or two players can play, and several game variations are included which set difficulty by adjusting the speed and the number of cars that appear on the freeway.