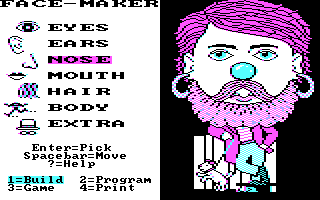 FaceMaker: Golden Edition is an updated version of FaceMaker featuring enhanced graphics. The game remains the same as in the original version; players are presented a game screen showing a person with a large face to the right and a menu of options along the left. Players can select from the menu different options for mouth, eyes, ears, nose, hair, and body style (the ability to change bodies is a new additition for the Golden Edition). Several styles are available for each and when a selection is made it will immediately be shown on the face.

Once players have a face of their liking, players can choose to either program simple animations the face will perform or can play a Simon-like game. When programming a face, players can have the face perform actions such as wink, smile, stick out its tongue, wiggle its ears, pause, or cry. The face will perform all the actions the player enters in order. In the mini-game, the computer chooses a series of actions; player's need to type in the actions the face performed in the same order. As in the game Simon, the face starts with a single action and each time the player responds correctly adds one more to the list. The game ends when the player responds incorrectly.