Temple of Apshai is a dungeon crawl RPG first published by Automated Simulations in 1979 for the TRS-80 and Commodore PET with versions for other systems to follow. In the game players take on the role of an adventurer exploring the monster filled ruins of the Temple of Apshai to locate treasures. The game was very successful for it's time and spawned several sequels and two expansions.

Temple of Apshai takes place in a series of four increasingly difficult dungeons consisting of over 200 rooms. Players need to explore the rooms one by one in search of treasures while combatting the 30 types of monsters located throughout.

There are two main programs in the game, the Innkeeper and the Dunjonmaster. Players begin with the Innkeeper which allows new characters to be created and weapons or other supplies to be purchased. Character creation is based on six Dungeons & Dragons inspired attributes; Intelligence, Intuition, Ego, Strength, Constitution, and Dexterity. The stats a character has help determine the outcome of encounters with opponents, which weapons or items can be utilized, how successful players are in haggling with shopkeepers, and more. Cassette versions of the game didn't have a way to save games in progress so players would need to write down their character stats and re-enter them using the Innkeeper program to resume a game; The 5.25" disk version didn't have this limitation and the Innkeeper could be used to save or load characters.

When players have setup their characters and are ready to begin exploring, the Dunjonmaster program is entered which provides a top down view of the dungeon along with a status summary. The dungeon rooms are large and are full of treasures, traps, secret doors, and of course assorted monsters. Temple of Apshai uses a mixture of turn based and real time gameplay; on each turn players can choose to walk (up to 9 steps from their location), change the direction they are facing, talk with or fight opponents, open doors, and collect treasures. Any action taken (along with the amount of equipment being carried) reduces the characters fatigue stat; if a character becomes too fatigued, the character will be forced to rest for a time before any further actions are possible. The enemies act in real time and will continue to move and attack regardless of if the player is doing anything. If a character has become fatigued this could be especially deadly as counter attacks aren't possible until the character recovers. As players progress through the dungeon, their characters gain experience which improves stats and any money found can be used to purchase better weaponry, shields, and other equipment. If a player dies in battle, it is possible a non-player character will come to the resuce, however this often requires payment.

Temple of Apshai included detailed descriptions of each room in the dungeon and was the first RPG to do so. The descriptions weren't in the game itself and instead printed in the instruction manual; players could match the room number displayed in the game with a description found in the manual. The descriptions could sometimes provide clues as to what type of enemies were nearby or which items could be found. 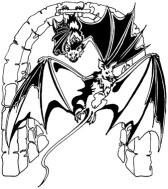 Product catalogs, magazines, flyers, or other documentation Dunjonquest: Temple of Apshai has appeared in.
*Note: If you are unable to see any images in this section, you may have an ad blocker installed that is blocking the thumbnails and/or images.