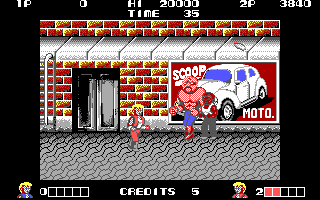 IBM EGA version of Double Dragon
Double Dragon is a side scrolling beat-em-up game originally released in arcades in August, 1987 by Technos Japan and was later ported to numerous home computers and game consoles. The game was one of the first highly successful games in the fighting genre and spawned several sequels as well as inspired many other beat-em-up's developed by other companies. Double Dragon included several features that were innovative for the time including the ability for two players to play simultaneously.

In Double Dragon the players Billy and Jimmy Lee, two martial arts masters. Billy's girlfriend, Marian, has been kidnapped by Willy, the leader of a deadly gang known as the Black Warriors. It is up to Billy and Jimmy to rescue her; to do so, players will need to fight the members of the Black Warriors through four different missions. Each mission consists of a large area that the screen scrolls over; the missions takes players through a city slum, a factory, a forrest, and finally the gangs hideout. Along the way different members of the Black Warriors attack players and need to be defeated before continuing further. Often numerous enemies will attack at once, however some of the home versions limit this to two enemies due to system limitations. There are several different types of members in the gang, each of which have different fighting capabilities and appearances. The enemies encountered may vary slightly depending on which version of the game is being played and include the following: To attack and defend players have a variety of fighting skills availble. This includes kicks, punches, elbow strikes, jumps, and head-butts. When facing opponents carrying a weapon, players can also pick up and use the weapon themselves if the enemy carrying it is knocked down. The original arcade version of Double Dragon provided each player with a joystick and three buttons to execute the variety of attacks available. Due to limitations most home systems had in their available controllers, home ports of the game typically modified the controls to use a combination of buttons and joystick movements to execute attacks. To defeat enemies, players need to use attacks to reduce the opponents energy until they are knocked down; once they have been knocked down several times they'll disappear from the screen. In some cases there are gaps in the terrain and enemies can be knocked off the edge of a platform which immediately eliminates them (however players need to be careful that they don't fall off the screen as well).

Players begin the game with a limited number of lives; each time they are hit, the life meter loses one or more blocks. When the meter is completely empty a life is lost, and the game ends when all players have run out of lives.

Product catalogs, magazines, flyers, or other documentation Double Dragon has appeared in.
*Note: If you are unable to see any images in this section, you may have an ad blocker installed that is blocking the thumbnails and/or images.