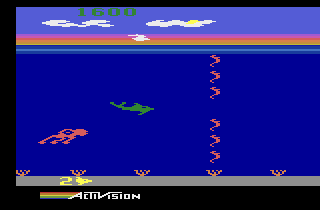 Dolphin is an action game released by Activision in 1983 for the Atari 2600. In the game players control a dolphin that is being chased by a giant sea squid; the goal is to earn points by surviving as long as possible!

Dolphin features a screen of the underwater world that scrolls to the left or right to follow the Dolphin's movement. The giant squid is in constant persuit; if it catches the dolphin, a life is lost. As players swim through the water obstacles appear in the form of a schools of seahorses. The seahorses form a vertical wall with a gap somewhere along the line; since the dolphin is swimming fast the wall of seahorses can approach quite quickly! To help identify where the gap is, the dolphin uses sonar. Players will hear a sound when seahorses are approaching and the pitch of the sound helps indicate where the gap is; a low sound indicates the game is near the bottom of the screen, while higher pitched sounds indicate it is near the top of the screen. If players miss the gap and the dolphin hits a seahorse, some swimming speed is lost which may allow the squid to get closer! There are also a few other objects in the game to help or hinder the player; the first is a seagull that flies overhead. If players leap out of the water and catch it, the dolphin is temporarily invulnerable and can chase the squid so it is further away. There are also some waves in the water; these are indicated by arrows showing the direction of the wave. If players swim into a wave moving in the same direction they are swimming, the dolphin speeds up. If an oncoming wave is hit, the dolphin loses speed. The squid can also swim into the waves and may speed up or slow down accordingly as well. The longer players stay alive, the faster and trickier the squid becomes! To alert players to changes, the squid and seahorses will change color each time the level of difficulty is increased. The game ends when all of the player's dolphins have been caught by the squid.

The Secret Society of Dolphins

As was common for Activision games of the era, players could earn a patch for achieving high scores. For Dolphin, there were two patches possible: For earning 80,000 points or more players were awarded the “Friends of Dolphincs” patch. A second patch was available for even high scores, the “Secret Society of Dolphincs” patch; the exact score needed for this patch was not stated, however it was under 500,000 points. To receive the patch, players needed to send to Activision a photograph of the screen showing their score.