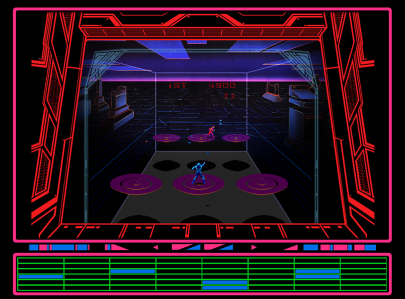 Arcade version of Discs of TRON
Discs of TRON is an arcade game released in 1983 by Bally/Midway. It is a follow up to TRON and like it's predecessor is inspired by the Disney movie. Intended to be included as part of the original game, Discs of TRON was instead left out due to time and hardware constraints and then later refined into it's own stand alone game. Facing off against Sark, players control TRON in a scenario similar to the Jai Alai battle between Flynn and Crom in the movie; the goal is to knock Sark off of the platforms with throwable discs without also being hit.

The game screen in Discs of TRON resembles the Jai Alai battle from the movie and consists of a series of concentric circle platforms (the view is 3D from behind TRON with Sark in the distance). The goal of the game is to defeat Sark by either knocking him off of the platforms or by hitting him directly with a disc. Both Tron and Sark can throw up to three discs at a time which will bounce around the arena before eventually returning (if it's not destroyed; destroyed discs will eventually regenerate). Player's can either dodge Sark's attacks, deflect them with a shield (which has a limited amount of uses), or by destroying Sark's discs with their own.

As the game progresses, Sark becomes more aggressive and has additional types of attacks including chaser orbs which are more difficult to dodge or deflect. The playfield has some variations as well; in some levels a barrier is placed between Tron and Sark and players need to throw their discs through gaps. On later levels the platforms also move up and down requiring players to aim or time their shots vertically as well as horizontally. There are 12 level variations in all, and after the 12th is completed the game continually repeats levels 6 - 12.

The controls in Discs of TRON resemble those of the original TRON; a joystick is used to move Tron around the screen, a trigger fires a disc, a button on top of the joystick can deflect attacks, and a spinner is used for aiming shots. The spinner can also be pulled up or pushed down slightly in order to aim up or down (in later levels, this may be necessary due to the moving platforms). This can also be used to bounce discs off of the ceiling in an attempt to destroy one of Sark's platforms.

Points are earned in Discs of TRON as follows: Bonus lives are awarded when certain point thresholds are reached (the number of points required is configurable).

Discs of TRON was available in three different cabinet styles; an typical upright cabinet, an evironmental cabinet, and second version of the upright cabinet which was made from unsold environmental cabinets. The environmental cabinet had additional features not found in the other versions which included additional sound effects, speech, surround sound, and flashing lights (there were, however, some versions of the upright cabinet including the speech board). All versions used a two way mirror to create an additional 3D effect; the monitor graphics are reflected off of the mirror with additional artwork behind it lit by a flourescent light giving the appearance of the game graphics hovering in front of the background. This technique was also used in several other games of the era including Space Invaders, Asteroids Deluxe, Omega Race, and more.

Product catalogs, magazines, flyers, or other documentation Discs of TRON has appeared in.
*Note: If you are unable to see any images in this section, you may have an ad blocker installed that is blocking the thumbnails and/or images.