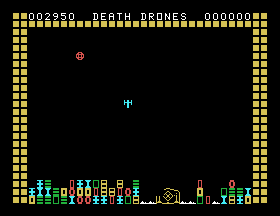 Death Drones is an action game released by Moonbeam Software in 1982 for the TI-99/4A. In the game, a city is under attack by alien drones! Piloting a space ship, players have the goal of stopping the invasion before a nuclear reactor is destroyed by the aliens reducing the city to rubble.

The game screen in Death Drones features a city along with a nuclear power plant along the bottom of the screen with players able to navigate their spaceship in the open space occupying the majority of the screen above. The alien drones appear one by one and will attempt to destroy the reactor; players need to shoot the drones quickly before they cause too much damage! When a drone appears, it will first attempt to destroy the player. If the player's ship is destroyed by a drone (either by being shot or by crashing into the drone), the reactor is temporarily defenseless allowing the drone to attack it. The reactor can only withstand 6 attacks before it explodes taking the city with it. If players can defend from the drones long enough to earn 1000 points, the reactor will be rebuilt. If no damage at all was sustained by the reactor during this time, the player is promoted to a new city with a new reactor. The game ends when a reactor and city are destroyed.