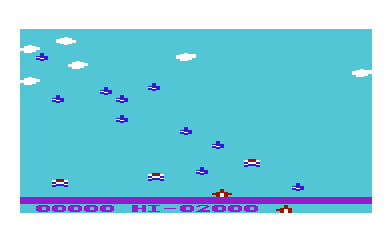 Commodore VIC-20 version of Cloudburst
Cloudburst is an arcade style action game developed by Tensor Technology and released in 1982 for the Commodore VIC-20 and Atari Home Computers. The game takes place on Earth where heavy pollution has created Acid Rain and mutant creatures, called Cloud Hoppers. When it rains, both fall to Earth and are deadly. Players need to defend the Earth from these dangers by shooting them with a neutron tank.

Cloudburst is a shooter where players control the neutron tank located at the bottom of the screen. Similar to other shooters such as Space Invaders or Demon Attack, the tank can only move left or right and not up and down however players can shoot up, to the right, and to the left. The game screen consists of numerous clouds that float by; both Acid Rain and Cloud Hoppers fall from the clouds and players need to shoot or dodge them. If a Cloud Hopper makes it to the ground, players need to be careful as it will walk along the ground towards the tank and needs to be shot before it reaches it. If the player's tank comes in contact with either the Acid Rain or a Cloud Hopper then it is destroyed; the game ends when all reserve tanks are lost. Once all of the clouds, the Acid Rain, and the Cloud Hoppers have been destroyed players move on to the next, more difficult level. Initially, there are 6 clouds on the screen; as each level is completed one more cloud is added until the maximum of 16 clouds at a time is reached. If players are able to complete the level with 16 clouds, the game repeats starting at 6 clouds again but with a higher speed.

Points are earned in Cloudburst by shooting the clouds, Acid Rain and Cloud Hoppers. The amount of points earned are as follows: Additionally, a multiplier is applied to the points depending on the level being played as follows: Players begin the game with 3 neutron tanks and earn an extra tank every 10,000 points. 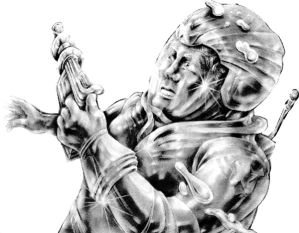 Product catalogs, magazines, flyers, or other documentation Cloudburst has appeared in.
*Note: If you are unable to see any images in this section, you may have an ad blocker installed that is blocking the thumbnails and/or images.