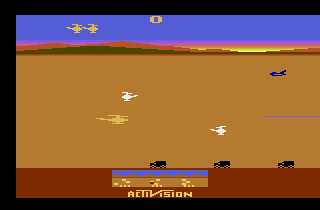 Chopper Command for the Atari 2600

Chopper Command is a side-scrolling shooter released by Activision for the Atari 2600 in 1982. In the game players control a helicopter with the goal of protecting a convoy of trucks from enemy fighters.

Gameplay in Chopper Command is somewhat similar to Defender. Instead of a space theme, players control a helicopter flying in a desert location. The game features a side view which scrolls horizontally as the player flies left or right and will eventually wrap around when the end of the playfield is reached. To help out, a long range scanner is located at the very bottom of the screen which shows the complete playfield along with enemy locations. The convoy of trucks that players are protecting appears at the bottom of the playfield travelling from right to left. On each wave in the game there are twelve enemies to defeat consisting of choppers or jets; players need to shoot all opponents before moving on to the next, more difficult wave. When the game begins players have three reserve helicopters; helicopters are lost when hit by enemy missiles, by crashing into enemies, or by crashing into the ground or a truck and the game ends when no reserves are remaining. Additional helicopters are earned for every 10,000 points (up to a maximum of 6).

Similar to other Activision games of the era, players could receive a patch for high scores. For Chopper Command, players received the “Chopper Commandos” for sending in a photo of the screen showing at least 10,000 points.

Product catalogs, magazines, flyers, or other documentation Chopper Command has appeared in.
*Note: If you are unable to see any images in this section, you may have an ad blocker installed that is blocking the thumbnails and/or images.