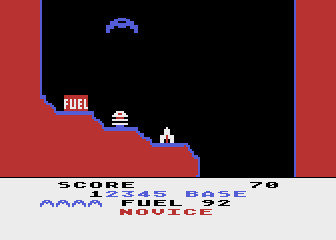 Caverns of Mars is a vertically scrolling shooter released for Atari 8-bit computers. The game was initially published on cassette as part of Atari's mail order Atari Program Exchange in 1981; It soon became the best selling APX title and additional releases as part of Atari's official product line were published in 1982 and 1983 on 5.25" disk and cartridge. The game resembles a vertical version of the arcade game Scramble; the goal is to guide a space fighter to destroy the target at the bottom of a cavern and then escape before time runs out.

Mars has declared war on Terra IV! As the pilot of the space fighter Helicon VII, players are tasked with sabotaging the Martian defense systems by activating a fusion bomb they have hidden in their headquarters. On each level of the game, the mission is to descend into the caverns of Mars, reach the bomb and activate it, then reverse course and escape the cavern before time runs out and the bomb explodes.

Naturally, the path to the bomb is a treacherous one. Aside from avoiding the tunnel walls, players will encounter Martian defenses in the form of rockets, space mines, laser gates, and other obstacles. The Helicon VII is shaped like an upside-down U and is equipped with two laser cannons (one on each side of the ship) to shoot targets. Each level is made up of several sections; Initially players need to navigate the winding caves while shooting targets. On more difficult levels, some narrow sections will also have laser gates blocking the path requiring careful timing to get past. Next, the cavern opens up a bit and numerous rockets and mines appearing; these can be shot or simply avoided, however there's enough of them it will be difficult to get past without destroying a path through. The final section is the Martian city; the path gradually gets narrower until the bomb is reached at the very bottom. Once the bomb is activated, the level reverses and begins scrolling upwards and players need to make it out before the timer runs out. If successful, the game then repeats with a higher level of difficulty.

Fuel in the game is limited; The Helicon VII can have a maximum of 99 fuel units which will continuously be depleted. If the fuel count reaches 0, the ship is destroyed. Throughout the caverns are fuel tanks; shooting one of these will award a small amount of fuel. Having enough fuel will be come critical at the end of each level; entering the city fuel is scarce and none can be found when attempting escape. If players don't have enough fuel on board when reach this part of the level, then they will lose a life before the escape is complete.