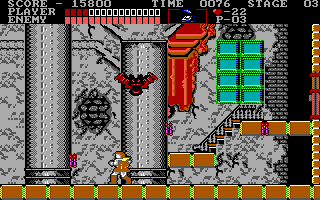 IBM EGA version of Castlevania
Castlevania is an action/platform game developed by Konami; it was initially released in 1986 in Japan for the Nintendo Family Computer Disk System with a cartridge version for the Nintendo Entertainment System released in North America shortly after. Ports for other systems including the Amiga, Commodore 64, and IBM PC followed. In the game players take on the role of Simon Belmont as he makes his way through Count Dracula's haunted castle with the ultimate goal of defeating Dracula himself. Numerous sequels have been released over the years on both classic and modern systems.

In Castlevania, the objective is to guide Simon Belmont through the many halls and passageways of Dracula's castle and eventually defeat Dracula himself. The castle is divided into 6 main sections each consisting of 3 stages (a map will show the players location in the castle as players progress through the game). At the end of each main section is a large boss players need to defeat before continuing on. Along the way numerous creatures appear that players can either destroy or simply avoid. The castle itself also presents challenges in the form of varied platforms, hidden passages, bottomless pits, deadly spikes, and more.

Simon has a limited amount of energy; each time players come into contact with one of the creatures some of the energy is depleted. When no more energy remains, a life is lost and the game ends when players have no more remaining lives. While most creatures deplete a small amount of energy, some dangers instantly deplete all energy, such as falling off the bottom of the screen or being hit by spikes. Additionally, each level has a time limit and a life is lost if time runs out.

Simon can run, jump, and duck to dodge the creatures in the castle or be equipped with various weapons to destroy them. Players begin the game with the just a whip; initially, the whip is limited in length and power however whip extensions can be picked up to improve it in up to two additional increments. Additional weapons can be picked up as well (although Simon can only hold one additional weapon at a time). Additional weapons include axes, fire bombs, boomerangs, a watch that temporarily stops time, and double or triple shot ability. Other bonuses that can be found will restore Simon's health, provide bonus points, or render the player invincible for a few seconds. Bonus items and weapons can be hidden in creatures and released when the creature is destroyed or hidden in the path and released when a particular item (such as a block or a candle) is destroyed. When a player dies, any additional weapons in use are lost.

Points are earned for defeating foes, destroying certain parts of the castle (candles, blocks, and so on), and collecting bonus items. Some versions of the game allow players to save their progress, however only one saved game is allowed at a time.

Product catalogs, magazines, flyers, or other documentation Castlevania has appeared in.
*Note: If you are unable to see any images in this section, you may have an ad blocker installed that is blocking the thumbnails and/or images. 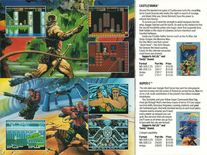