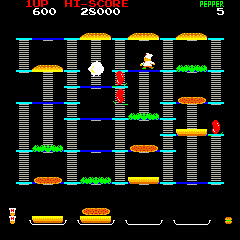 Arcade version of BurgerTime
BurgerTime is an action game developed by Data East for arcades in 1982 and later was ported to many home computers and game consoles. In the game players control Chef Pepper with the goal of assembling hamburgers while avoiding the various characters that are in pursuit.

In BurgerTime the game screen consists of several empty plates at the bottom of the screen with a series of platforms, ladders, and burger ingredients (including buns, burger patties, lettuce, and tomato) located above them. The goal is to create a completed burger on each of the plates in order to move on to the next level. To do this, players need to control Chef Pepper to walk over the full length of each of the ingredients on the platforms. When this is done, the ingredient will fall down one platform level; if there is another ingredient below, it will also be knocked down a level, until eventually there are no more platforms below and the ingredient falls onto a plate. A burger is complete when all the ingredients have been knocked off of the platforms onto the plate. To make the game more difficult, there are numerous characters that constantly chase the player; there are three types of enemies: a hot dog, a pickle, and an egg. The player has several types of defense; the first is a pepper shaker that can be used to stun enemies temporarily. When stunned players can walk right past them. The amount of pepper the player begins the game with is limited, but more pepper can be acquired by collecting bonus items that occasionally appear on the screen. Additionally, enemies can be crushed by falling ingredients if they happen to be on a platform below when it falls. Lastly, enemies will fall and be crushed if they are standing on top of an ingredient when a player finishes walking over it and it falls. This last defense can be useful; normally ingredients only fall down one level at a time, however when falling with an enemy top it will continue to fall an additional level for each enemy standing on top of it.

Each time a level is completed, the layout of the platforms and ladders changes; there are six screens total which repeat after the last one is completed. As the game progresses, the number of enemies on the screen at one time increase, they chase the player at a faster rate, the platform layout becomes trickier, and assembling a burger requires more ingredients. 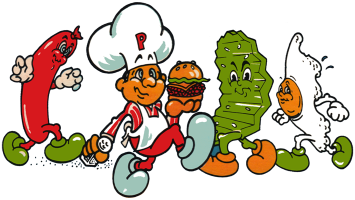 Product catalogs, magazines, flyers, or other documentation BurgerTime has appeared in.
*Note: If you are unable to see any images in this section, you may have an ad blocker installed that is blocking the thumbnails and/or images. 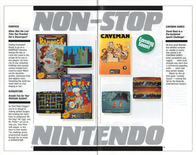 This game has releases with the following standardized packaging styles:
Texas Instruments (Blue/Red)