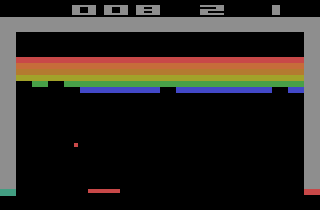 Atari 2600 version of Breakout
Breakout is a Pong inspired game that was first released in arcades in 1976 by Atari, Inc. and later ported to the Atari 2600 in 1978. In the game players control a paddle located at the bottom of the screen and need to deflect a bouncing ball to destroy rows of bricks. Since its release, Breakout has inspired countless games which use the same concept including a sequel, Super Breakout, numerous clones, and one of the most popular variations, Arkanoid.

In Breakout, the game screen consists of layers of bricks at the top of the playfield with a paddle at the bottom that players control. The goal is to destroy all of the bricks by deflecting a bouncing ball into them using the paddle. If the ball is missed and falls off of the bottom of the screen, it is lost. The game ends when all of the allotted balls are lost. Once all bricks have been destroyed, the game repeats; after two screens of bricks are destroyed the game is over.

As the game is played, the speed of the ball will increase; it starts out slow and then will first increase after 4 bricks are destroyed and again when 12 bricks are destroyed. It will increase even further in speed if bricks in the top rows are destroyed. Additionally, the paddle will reduce in size after the ball hits the top wall (if the ball is lost, it will return to its normal size for the next turn). Points are earned in Breakout for each brick destroyed; depending on the row the brick is in, anywhere from 1 to 7 points are awarded (The higher rows are worth more points).

Due to limitations of the system, the Atari 2600 version of Breakout features only 6 rows of bricks instead of the 8 found in the original arcade version. Additionally, the Atari 2600 has no gaps between bricks making each row appear as a solid line. Additional game variations are available in this version of the game which include breakthru (the ball will go straight through bricks instead of being deflected as normal), a timed version where you need to earn as many points as possible in a given time limit, and invisible breakout (the remaining bricks are only shown for a short duration after one of them is hit). Additional game options allow players to catch the ball with the paddle or to control the direction of the ball.

Product catalogs, magazines, flyers, or other documentation Breakout has appeared in.
*Note: If you are unable to see any images in this section, you may have an ad blocker installed that is blocking the thumbnails and/or images.