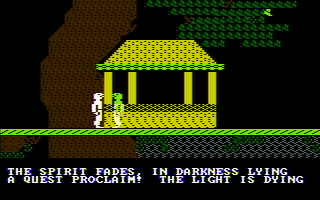 IBM PCjr version of Below the Root
Below the Root is an adventure game released by Windham Classics in 1984. It is based on the Green Sky Trilogy series of novels by Zilpha Keatley Snyder and continues the story where the books end (although the game title comes from the first book in the trilogy). The story for Below the Root is written by Snyder and is considered to be canon, somewhat unusual for a video game. In the game players can choose one of five different characters each with different abilities which will affect how players can complete the game. After selecting a character, players set out on their quest in the world of Green-sky...

In the world of series there are two races of people, the Kindar and the Erdling. The Kindar of Green-sky live in the trees while the Erdling are descendant from exiled Kindar and live underground. Following the novels the two societies are joined back together, however there is still a lot of tension between the two races. As the story in the game Below the Root opens, a wise old woman D'ol Falla has a vision and hears the phrase "The Spirit fades, in Darkness lying. A quest proclaim - the Light is dying.". It's not immediately clear what the meaning of this is, and players will need to embark on a quest to find the meaning and to restore peace between the Kindar and Erdling.

Below the Root features an interface that doesn't require any typing. The game resembles a platform game with a side view where players can move their chosen character around the game world with a joystick or keyboard. To perform actions and interact with other characters commands can be selected from a menu of available options. The world consists of an above ground section in the trees (the world of the Erdling) and an underground area (the world of the Kindar) with each area containing numerous platforms, ladders, and buildings which players can climb and jump to explore. To advance the story players will need to talk with the numerous other people that are encountered in the game as well as collect items to use for solving puzzles and reaching new areas. To help navigate the world, players are equipped with a shuba, a garment which allows players to glide through the air without falling. Depending on the character chosen, additional spirit skills can be learned along the way including telepathy (called "pensing"), telekinesis (called "kiniporting"), and the ability to grow temporary tree branches (called "grunspreking") to get past large gaps. Using telepathy to communicate with both humans and animals encountered helps to grow the players spirit skills which will ultimately be necessary to progress through the game.

There is very little violence in Below the Root; the characters in the story are opposed to all kinds of violence and in the game players can only be hurt by falling or walking into walls and other obstacles. If players themselves perform violent actions, it will harm their abilities and may render the game unwinnable after a point. Health points and game time can be lost if players are hurt, and while the player's character can't die they can be rendered unconscious and will be sent back to their house. Players may also become captured and sent to a prison house; if unable to escape, players are also able to return to their house with a loss of health and time. To restore health, players will need to find and eat food (though the Erdling do not eat meat, so if the player has chosen an Erdling character very little health is provided for eating meat). 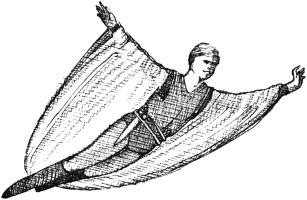