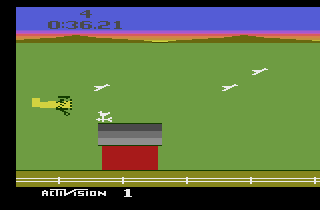 Barnstorming for the Atari 2600

Barnstorming is a racing game released by Activision for the Atari 2600 in 1982. In the game players control a biplane with the goal of flying through a series of barns while avoiding obstacles in the shortest time possible.

Players control a biplane which can move up or down by moving the joystick and speed up or slow down by pressing or releasing the button. The plane is on the left side of the screen which scrolls continuously from right to left. The goal is to fly through a set number of barns in the shortest time possible. Along the way there are several obstacles; between the barns there may be one or more windmills and weather vanes which players need to fly over. In the sky flocks of geese appear (if the plane is flying fast enough) that need to be avoided. If players hit any of these obstacles or crash into a barn instead of flying through it, the plane temporarily loses speed (or even stops completely for a moment). The game ends when players have flown through the required number of barns; if players miss any barns, the course is extended until the required number is reached. The number of barns a player needs to fly through varies depending on the difficulty level selected; the four included game options are as follows:

Product catalogs, magazines, flyers, or other documentation Barnstorming has appeared in.
*Note: If you are unable to see any images in this section, you may have an ad blocker installed that is blocking the thumbnails and/or images.