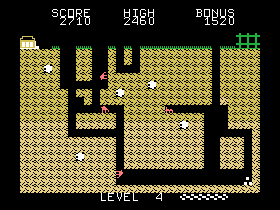 Anteater is a Dig Dug inspired action game released by Romox in 1982 for the TI-99/4A and Atari Home Computers. In the game players control an ant with the goal of retrieving food and bringing it back to the nest, however there are deadly anteaters wandering around which need to be avoided!

Anteater is a dig your own maze style game similar to Dig Dug. Players control an ant and need to pick up the food near a house in the upper left part of the screen and bring it back to the nest in the lower right. As players move the ant through the dirt a tunnel is formed. Starting out on the surface are anteaters; the anteaters can't dig through the dirt, but once players complete a tunnel that reaches the surface, the anteaters will be in pursuit. The ant has several possible defenses; the first is 5 explosive eggs. When an egg is left behind, it will explode a few seconds later and destroy any nearby anteaters. The second option is to crush the anteaters by digging underneath rocks causing them to fall.

Players begin the game with three ants and are awarded an extra ant each time all of the food is successfully brought back to the nest; the game ends when players lose all of their ants. As the game progresses, the speed increases and the number of anteaters increases.

Product catalogs, magazines, flyers, or other documentation Anteater has appeared in.
*Note: If you are unable to see any images in this section, you may have an ad blocker installed that is blocking the thumbnails and/or images.