Ambulance is an action game released for the TI-99/4A by Funware in 1983. In the game players drive the titular ambulance with the goal of safely delivering patients to a hospital. The game features a top down view of a city with numerous buildings, a few one way roads, railroad tracks, and, of course, a hospital. When a house begins flashing, it indicates there is a patient that needs help; players need to guide the ambulance to the house, pick up the patient, and return to the hospital within a limited amount of time. There are other cars on the road which need to be avoided (they don't stop for the ambulance!) and, from time to time, a train may go by; crashing into any of these will cost players an ambulance. After successfully helping the required number of patients, the game proceeds to the next level; as the levels increase, the game becomes more difficult by increasing the complexity of the street layout and adding more cars and trains. Players begin the game with only three ambulances, and the game ends when all of them have crashed or if five patients are lost. Points are earned in the game for successfully delivering patients to the hospital.

Product catalogs, magazines, flyers, or other documentation Ambulance has appeared in.
*Note: If you are unable to see any images in this section, you may have an ad blocker installed that is blocking the thumbnails and/or images. 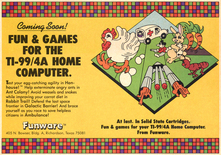