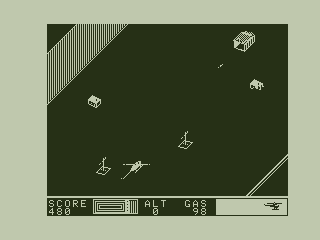 Zak's Son for the Dragon 32

Zak's Son is a variation of the game Zaxxon released by Cable Software, Ltd. for the Dragon 32 in 1984. Flying a helicopter, the objective of the game is to fly as deep into rebel occupied territory as possible.

As in Zaxxon the game uses a scrolling isometric view with the player's helicopter towards the left side of the screen. In addition to being able to fly left or right in the scrolling area, the helicopter can also move up and down. An altimeter at the bottom of the screen indicates how high the helicopter is since there aren't other visual cues such as a shadow on the ground. Along the ground are various buildings and other targets that need to be destroyed; if players are flying above 3 on the altimeter, they are too high to shoot ground based targets but also can't crash into them. Flying lower allows them to be shot, but makes the helicopter vulnerable to colllisions. Other dangers include missiles and enemy planes which can be a hazard at any height. The helicopter has a limited amount of fuel; additional fuel can be acquired by shooting targets marked with an "F" which appear on the ground occasionally. Points are awarded for shooting targets, and the game ends either when players run out of lives by crashing into obstacles or if fuel runs out.