Zak McKracken and the Alien Mindbenders 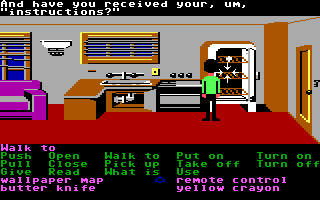 IBM PC EGA version of Zak McKracken
Zak McKracken and the Alien Mindbenders is an adventure game developed by Lucasfilm Games and released in 1988 for the Commodore 64. It was shortly after ported to the IBM PC, Atari ST, and Amiga. It is the second game Lucasfilm developed which uses their SCUMM game engine (Script Creation Utility for Maniac Mansion) following Maniac Mansion; like Maniac Mansion, Zak McKracken features a similar point and click interface for interacting with the game. The game's story follows the title character Zak McKracken, a tabloid reporter, attempting to foil an alien plot to reduce human intelligence with their "mind bending machine".

The game takes place in 1997 (which was about 10 years in the future at the time the game was being developed) and follows Zak McKracken, a reporter for the tabloid National Inquisitor. Zak isn't satisfied with his assignment (to track down a two-headed squirrel) and wants to become a "real" reporter; however, that night he has a strange dream about aliens and in the morning makes some notes about the dream and begins to investigate. Three other characters have also had similar dreams, and will be able to help Zak out. The conspiracy that's uncovered involves aliens known as Caponians attempting to take over world by slowly reducing the intelligence of all humans using their invention, the mind bending machine. As a disguise, the Caponians have taken over the phone company and wear a hat and nose glasses (a disguise Zak himself will be able to utilize throughout the game). The Skolarians, an ancient alien race, have left a defensive machine behind, however the parts are scattered on both Earth and Mars and need to be located. To win the game, players need to successfully locate all of the necessary parts and assemble the machine to stop the Caponian conspiracy.

Zak McKracken and the Alien Mindbenders uses a point-and-click interface to interact with the game. Along the bottom of the screens is a list of verbs along with the player's inventory. By clicking on verbs, objects, locations, or inventory items a sentence can be constructed which causes the selected character to perform the command (such as pick up an object, talk to another character, walk to a location, and so on).

Similar to Maniac Mansion, Zak McKracken attempted to differentiate itself from other adventure games by making it difficult to die or become stuck in a no win situation. While there are a number of ways to both die or become stuck in Zak McKracken, the scenarios were fewer and less frequent than was common in many games of the era (such as those by Sierra); Lucasfilm Games would continue to refine the technique further with later games including Loom and The Secret of Monkey Island. 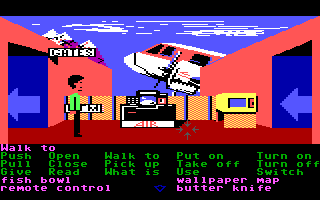 IBM PC version of Zak McKracken, at airport
Zak McKracken and the Alien Mindbenders features several playable characters and during certain parts of the game players may switch between them at will. For many of the puzzles, it's necessary to either use a particular character or have multiple characters work together. Throughout the game, players can control the following four characters: Non-playable characters are encountered throughout the game too; in some cases the player can interact with them, at other times they will be shown in remote locations via cut-scenes which are used to advance the plot or provide clues to the player.

Product catalogs, magazines, flyers, or other documentation Zak McKracken and the Alien Mindbenders has appeared in.
*Note: If you are unable to see any images in this section, you may have an ad blocker installed that is blocking the thumbnails and/or images.