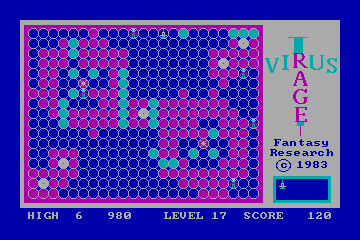 Virus Rage is an action game released by Fantasy Research, Inc. for the IBM PC in 1983. In the game, players control a tiny hypodermic syringe with the goal of saving a patient from a viral infection.

The screen in Virus Rage consists of a bubble-like grid with one or more active nuclei that spread the virus. Cells near a nucleus will soon become infected causing the virus to spread. To complete each level, players need to destroy all of the nuclei. This can't be done directly, however; shooting a nucleus directly causes the patient to die and players to lose a life. Instead, all of the viral cells directly surrounding the nucleus need to be destroyed after which the nucleus will die. The virus won't go down without a fight, of course; throughout the playfield numerous mutants are constantly chasing the player and will turn dead cells they come into contact with into live viral cells. The mutants can be shot, however they'll soon regenerate. On later levels fast moving spores also appear which attack the player. The game includes 30 levels, each with a different layout. In addition to the layout changes, the game increases in speed and difficulty as players progress through the levels. A practice mode is included which allows players to choose any of the 30 levels to play, and there is also a demo mode which shows the computer playing the game.

This game has been tagged with the following features: