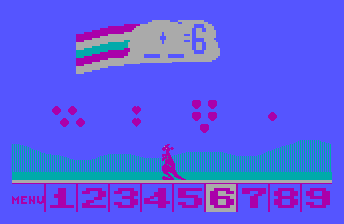 IBM PC version of Up & Add 'Em
Up & Add 'Em (also released as Learn to Add) is an educational game designed for children ages 3 - 7 designed to help teach addition skills. Developed by Childware, versions were released for the Apple II, Commodore 64, and IBM PC computers.

In the game players have the goal of creating a rainbow by solving addition problems. Each turn begins with players highlighting a number from 1 through 9 located along the bottom of the screen; Once a number is selected, the program presents a math problem which incorporates the selected number. In the middle of the screen several groupings of varying numbers of balloons appear; players need to guide an animal to the group containing the correct number of balloons to fill in the blank(s) in the math problem. If the selected answer is correct, the a section of a rainbow appears. Players win the game when enough problems are answered correctly for the rainbow to span the entire screen.

The game includes four different skill levels. On easiest skill levels, only symbols are shown instead of numbers and players just need to match an available choice with the example at the top of the screen. On medium skill levels and above actual numbers are shown. At first players only need to provide the sum for the equation, and then on the most difficult levels, one or more blank spaces can appear anywhere in the equation.