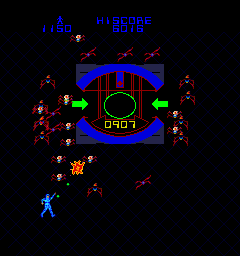 Arcade version of TRON
TRON is an arcade game released in 1982 by Bally/Midway that is based on the Disney movie of the same name. The game takes place in the world inside a computer with players controlling the title character TRON; there are four different mini-games (called domains) based on scenes from the movie to complete (which then repeat with higher difficulty). A fifth game which was originally intended to be included was later released as a seperate game, Discs of TRON. The game was never ported to any home computers or consoles of the era (though was eventually released on XBox Live in 2008).

TRON begins with an overhead view of the computer world showing the four domains in the game, each a different color; To complete each level, players need to complete all four domains. The domains can be chosen by guiding a cursor to one of the quadrants; domains can be completed in any order, however the location is random and varies from game to game. After a domain is selected, one of the four games will begin (if players don't choose a domain themselves, the game will randomly choose one).

The controls in TRON include a joystick with a trigger and a spinner; how the controls are used varies slightly depending on the domain, but generally the joystick allows movement of the player's character, the trigger fires a shot, and the spinner aims shots. The four games player's will encounter are as follows: After all four domains are completed, the game repeats with increased difficulty. Each difficulty level has a different name, mostly named after programming languages; the levels encountere are RPG, COBOL, BASIC, FORTRAN, SNOBOL, PL1, PASCAL, ALGOL, ASSEMBLY, OS, JCL, and USER.

Points are earned in TRON for defeating enemies and completing domains as follows:

Product catalogs, magazines, flyers, or other documentation TRON has appeared in.
*Note: If you are unable to see any images in this section, you may have an ad blocker installed that is blocking the thumbnails and/or images.