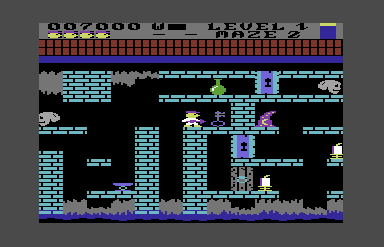 Commodore 64 version of Trolls and Tribulations

Trolls and Tribulations is a side scrolling action/puzzle game published by Creative Software in 1984 for the Apple II, Atari 8-bit computers, and the Commodore 64. In the game players control a troll with the goal of retrieving valuable treasures hidden throughout a maze.

Trolls and Tribulations consists of a series of mazes players need to find their way through each consisting of a series of platforms, locked doors, and other traps players will need to navigate. Players control a troll which can walk, jump straight up or diagonally, and fire a gun. The game uses a somewhat unusual control scheme: pushing the joystick left or right moves the troll one full step in that direction, pushing down on the joystick will fire a gun in the direction the troll is facing, pushing up will cause the troll to jump directly up, and pushing the fire button will cause the troll to jump forward in the direction it is facing. Players begin each level with only eight bullets, however they can be replenished either when the player loses a life or by returning to the middle location on the starting screen.

To complete each maze, several doors will need to be unlocked along the way. Most doors can be unlocked with a key that players will need to locate first. In many (though not all) of the mazes the first door is an exception; in some cases to open the first door leading to the remainder of the maze players need to defeat eight cretins. The cretins appear at the top of the screen and walk continuously forward and towards the bottom (falling down a level each time there's a gap in the platform). After shooting a cretin, it turns into an egg; players need to quickly knock the egg off of the platform before it hatches into another cretin. Once the required number of cretins have been destroyed, the door is unlocked and players can proceed.

The mazes consist of a convoluted series of platforms players need to navigate; there are many gaps in the floor along with spiders, buzzards, and skulls that need to be avoided. The bullets used on the cretins have no effect on buzzards, spiders, and skulls; players will instead need careful timing to run from, jump over, or momentarily hide from these creatures. Before reaching the final exit door of the maze, there are usually several other doors that need to be unlocked. Keys are located throughout the maze and need to be acquired before the exit door and others can be opened. Several types of bonus items can be found as well which award points. Players lose a troll anytime they fall off of the bottom of the screen or are caught by a buzzard, cretin, or spider. The game begin with six trolls, and ends when all are lost. There are three different levels available, each of which consist of numerous mazes.

Product catalogs, magazines, flyers, or other documentation Trolls and Tribulations has appeared in.
*Note: If you are unable to see any images in this section, you may have an ad blocker installed that is blocking the thumbnails and/or images.