The Colonel's Bequest is a mystery/adventure game designed by Roberta Williams and first published by Sierra On-Line in 1989. The first game in the short lived Laura Bow Mysteries Series, players take on the role of Laura Bow, a student at Tulane University and aspiring journalist. Gameplay is similar to other Sierra SCI games, however The Colonel's Bequest is notable for having a greater emphasis on the characters and story rather than solving puzzles. The story is an Agatha Christie style murder mystery where players are tasked with determining who is responsible for a series of mysterious deaths. A sequel, The Dagger of Amon Ra, was released in 1992.

Set in 1925, the game's story begins at Tulane University in New Orleans as Laura Bow is invited by her friend Lillian to spend the weekend at the mansion of her uncle, the Spanish-American war veteran Colonel Henri Dijon. The mansion is a former sugar plantation located on a secluded island; upon arrival at the now dilapidated estate, the Colonel gathers family and staff together for a reading of his will. Not everyone in the room gets along; fights soon break out, and as the night wears on there are several murders! Trapped on the island until morning, Laura needs to investigate to find out who is responsible. Relationships among the Colonel, guests, and staff are varied, and in typical mystery style everyone has a different personality and potential motive. Any of the characters encountered could be the murderer, and througout the game several may also turn up as murder victims. The cast of characters found in the game are:

Although less important to the story, the Colonel's pets can also be found in the game: Aside from being friends with Lillian, Laura isn't directly related to the Dijon family or staff allowing her to not be of interest to the murderer. This doesn't make her completely safe, but does allow her to go about her investigation relatively freely. Clues can be found throughout both in the form of physical items that can be picked up as well as clues given by characters (both in what they say and how they may react). Questioning characters directly can sometimes yield useful details, but not always; sometimes they don't want to talk, will become annoyed and angry, or even provide misleading information. Luckily, the mansion is large and contains hidden passages and other places to spy from; being secretive is often a good way to truly learn about what is going on. Many events in the game are timed; characters will often reveal they intend to meet or be at a particular location at a given time allowing players to follow and listen in on the conversation. The game doesn't run exactly in real time; while the in-game clock advances in quarter-hour increments, players can take longer or shorter amounts of actual time to trigger the story elements that advance the clock. It's also possible to miss events completely or more than one event can occur at a time making players have to decide which is the more important one to witness.

Gameplay in The Colonel's Bequest is very similar to other Sierra SCI games; players can move Laura Bow around the 3D environment and type commands to perform actions such as picking up or using items, talking with characters, and so on. In typical Sierra adventure fashion, there are a number of ways for players to die including the mundane such as wandering off of a path or, especially later in the game, by becoming a victim of the murderer! The entire game takes place on the island or in the mansion. Most of the locations in the game are immediately available for the player to explore further adding to the emphasis of learning about the characters and their story rather than puzzles or reaching new locations. A notable exception to this is the mansion attic. A key to this room isn't acquired until the end of the game where the final showdown occurrs; several endings are possible depending on actions taken and what the player has learned. The game doesn't feature a traditional Sierra-style scoring system; no points are visibly awarded throughout the game, however upon completion a rating is provided based on how many of the secrets were discovered. Since it is possible to complete the game without discovering all of the clues or even the identity of the murderer, hints are provided on things that were missed to encourage playing through the game again.

Product catalogs, magazines, flyers, or other documentation The Colonel's Bequest has appeared in.
*Note: If you are unable to see any images in this section, you may have an ad blocker installed that is blocking the thumbnails and/or images. 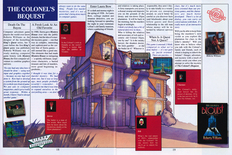 This game has been tagged with the following features:
Sierra Creative Interpreter Copy Protection: Red Filter