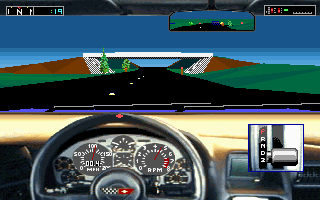 IBM MCGA/VGA version of Test Drive III
Test Drive III: The Passion is a driving simulation and racing game. It includes three exotic cars players can drive (more were available as add-ons) and several locations to drive through (again, additional scenery was available as an add-on). Unlike previous games in the Test Drive series, Test Drive III allowed players to drive anywhere across the landscape; there were several routes available to the destination, and players could even drive off-road (assuming they didn't crash into a lake, trees, or other obstacles). Test Drive III was also the first game in the series to replace the 2-D sprites with a full 3-D environment. Test Drive III also included new features to improve the realism over its predecessors by adding trains that circled around on the tracks, day and night scenery, rainy weather, windshield wipers for the cars, the ability to turn on headlights, and the ability to change radio stations (i.e. the background music).

Product catalogs, magazines, flyers, or other documentation Test Drive III: The Passion has appeared in.
*Note: If you are unable to see any images in this section, you may have an ad blocker installed that is blocking the thumbnails and/or images.

This game has been tagged with the following features:
Copy Protection: Code Wheel