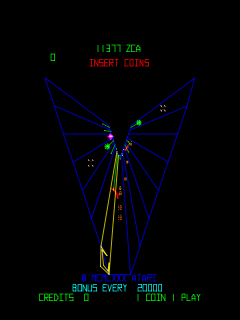 Tempest is a action/shooter game originally released in arcades by Atari in 1981 with ports released for many computer systems released later on. In the game players control a ship which can move around the perimiter of a 3D wireframe surface while numerous enemies attack that need to be either shot or avoided. Tempest was Atari's first game to use their "Color Quadrascan" monitor, their brand name for a color vector monitor.

The goal in Tempest is to earn as many points as possible (and survive as long as possible) but shooting the numerous, attacking enemies in a 3D geometric playfield. The playfield is a wireframe surface appearing to recede into the distance; the player controls a Blaster (a claw shaped ship) which is located along the nearest edge and can move along the surface one segment at a time. Each level features a different shape for the playfield; in many cases it is completely enclosed forming a tube allowing the player to loop around, otherwise there is an end on the left and right the player can't move past. There are 16 unique geometric playfields, and if the player completes all 16 the game repeats with a higher level of difficulty.

There are 8 types of enemies which attack from various directions, though most appear in the distance first giving players an opportunity to shoot them. If any enemies do reach (or appear at) the top the playfield, players will have to avoid them as shots can only fire forward. If players get in a bind, a super-zapper is available which destroys all enemies on the screen. The super-zapper can be used once per level, however it doesn't earn points for any enemies it destroys.

After each level is complete, the player warps to the next level by moving down the playfield. In some cases, enemies leave behind spikes of varying lengths at the end of the playfield; while the spikes are usually harmless during each level, any remaining spikes that aren't destroyed prior to warping will need to be avoided or a ship is lost. Points are earned for shooting enemies and bonus ships are awarded for crossing certain point thresholds. The game ends when all of the player's ships have been destroyed.