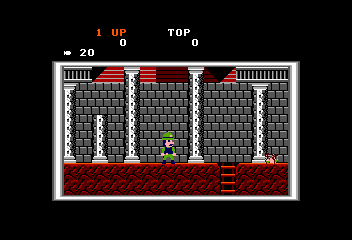 Super Pitfall is a platform/action game initially released in Japan for the Famicom and PC-8801; versions were later released in the U.S. for the Nintendo Entertainment System and the TRS-80 Color Computer 3. The game is roughly a remake of Pitfall II: Lost Caverns with a similar concept and gameplay; the goal is to guide Pitfall Harry through numerous underground caverns to find the Raj diamond, rescue his niece Rhonda and his sidekick Quickclaw, and then escape.

As Pitfall Harry, players need to explore a large, maze-like cavern. Harry's niece Rhonda and his sidekick Quickclaw are lost somewhere in the cavern and need to be rescued; additionally, the Raj diamond is hidden somewhere and needs to be recovered to win the game. Super Pitfall adds a few additional complications that are not found in Pitfall II; Rhonda has been turned to stone, so Harry will need to location a magic potion capable of turning her back to normal. Quickclaw has been imprisoned, so the proper key will need to be located to free him. Finally, players also need to make their way back out of the caverns to the starting location. Gold bars can be found as well which award bonus points, although locating them is not required for completing the game.

As in previous Pitfall games, players can run and jump along the myriad platforms, climb ladders, and swim through water to navigate the caverns. For the first time in the series Harry is also equipped with a gun which can be used to shoot some of the opponents; ammo is limited, however (additional bullets can occasionally be found scattered throughout the cavern). Most opponents take only a single shot with the gun to eliminate, however there three large cavemen players will encounter which take multiple hits. Similar to the original Pitfall and unlike Pitfall II, players have a limited number of lives. Coming into contact with any of the different creatures that inhabit the caverns along with some other dangers will cost a life and the game ends when players have no remaining lives.

The caverns in Super Pitfall will take some trial and error to navigate; dead ends, traps, warps to different areas, hidden keys, and more will take players some exploration to find their way through. The game doesn't include a save feature, so players need to start from the beginning each time.

The visual presentation varies slightly depending on the version of the game; the original Famicom version and NES version featured scrolling screens while the PC-8801 and TRS-80 Color Computer versions featured fixed/flip screens.