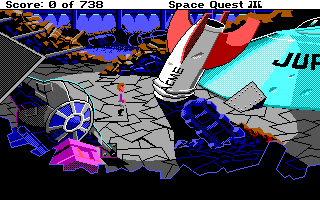 IBM EGA/VGA version of Space Quest III
Space Quest III: The Pirates of Pestulon is a 3D animated adventure game first published in 1989 by Sierra On-Line. It is the third game in the Space Quest series, and is the first in the series to use Sierra's newer SCI game engine. The gameplay is similar to previous Space Quest games and other adventure games Sierra developed as well; in this chapter, players control Roger Wilco with a mission to rescue The Two Guys from Andromeda (developers of the series!) who have been captured.

Space Quest III picks up where the previous game left off; at the start, Roger Wilco is in hibernation in an escape pod floating randomly through space. A robot controlled garbage freighter spots the escape pod and picks it up which activates an automated sequence to wake Roger up. Now stuck on the freighter, Roger locates and repairs an abandoned ship, the Aluminum Mallard, which can be used to escape and travel to other locations.

Immediately after Roger escapes, an Arnold Schwarzenegger inspired android, Arnoid the Annihilator, appears and begins to persue Roger for failing to pay for a whistle in Space Quest II. The desert planet of Phleebhut will become the location Roger needs to defeat Arnoid before continuing on. Later, while visiting a Monolith Burger (a McDonald's inspired fast food restuarant), players can play a game within a game called Astro Chicken. Astro Chicken resembles the arcade game Lunar Lander somewhat, and if players can earn enough points the goal of the game is revealed: The Two Guys from Andromeda, software developers, have been captured by ScumSoft and are being forced to write bad games. The hidden message in Astro Chicken was placed there by the Two Guys with the hopes someone would find it and rescue them. Now that more information on the Two Guys is known, Roger needs to located Pestulon, a moon of the volcano world Ortega. It is hidden by a shield generator, and once the generator is destroyed Pestulon becomes visible and Roger can land there. Once on Pestulon, Roger sneaks into the heavily guarded ScumSoft headquarters, locates the Two Guys, and escapes.

Space Quest III is the first game in the series to use Sierra's newer engine, SCI (Sierra Creative Interpreter), which supports higher resolution graphics (320x200 16 colors) and stereo sound with supported sound cards. The overall gameplay remains similar to prior games, however, and features a parser interface allowing players to type in commands (it is the last game in the series to do so; starting with Space Quest IV Sierra began using a point-and-click interface). By typing commands Roger can perform various actions such as picking up items, using items, talking to characters, and so on. Players can use a mouse, joystick, or keyboard to move Roger Wilco around on the screen (unlike later Sierra games, players need to manually navigate Roger around obstacles; the game isn't smart enough to have him walk around fully by himself). In a few parts of the game there are short arcade style action sequences as well, including the Astro Chicken game and a battle while escaping from Pestulon in the Aluminum Mallard. As is typical for Sierra adventure games, players can die often so it's recommended to utilize the save feature frequently.

Space Quest III is the first game to officially name the main character Roger Wilco. Space Quest I and Space Quest II both suggested Roger as a default name, however players could choose any name they wanted. 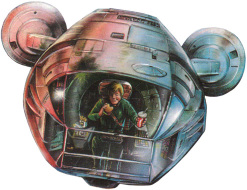 Product catalogs, magazines, flyers, or other documentation Space Quest III: The Pirates of Pestulon has appeared in.
*Note: If you are unable to see any images in this section, you may have an ad blocker installed that is blocking the thumbnails and/or images. 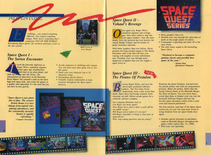 This game has been tagged with the following features:
Sierra Creative Interpreter Copy Protection: None