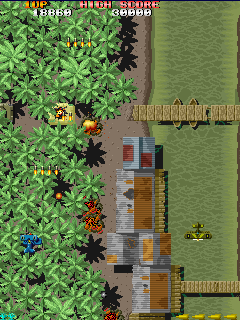 Sky Shark is a vertically scrolling shooter developed by Toaplan Co., Ltd. and first released in arcades in 1987 and was later ported to several computers and game consoles. In the game players pilot a biplane and need to survive multiple missions while earning as many points as possible by shooting the various land and air based opponents. A sequel, Fire Shark, was released in 1989.

In Sky Shark players have a top-down view of their biplane which is equipped with forward firing guns and a limited number of bombs. The varied landscapes (which scroll continuously in a vertical direction) have an extensive number of enemies in the form of a wide variety of planes, boats, tanks, naval vessels, and gun turrets. While many opponents can be destroyed with a single shot, larger planes and vehicles or those with heavy armor will take multiple hits. Additionally, enemy tanks and other ground vehicles often start out hidden in buildings or underground bunkers; if players destroy the enemies cover, they will also have the opportunity to destroy the tanks before they can begin an attack.

At the start of the game, the player's biplane fires only two bullets at a time. It is possible to upgrade the firing capability by acquiring power-ups. Each time a power-up is collected, the firing power increases by another two bullets shot at a time (up to a limit) providing wider shot coverage. If the player loses a life, the firing capability returns to the initial two bullets at a time. The plane also has a limited number of bombs; when bombs are dropped, they inflict a large amount of damge to any air or ground targets in a wide area. Additional bombs can be picked up by flying over a "B" icon left in place after destroying certain ground enemies. At the end of each mission, bonus points are awarded for any bombs players have remaining.

From time to time a squadron of enemy planes will appear; if players shoot all the planes in the squadron before any leave the screen, a bonus is awarded. For yellow squadrons 1000 points are awarded, red squadrons release an "S" power up which increases the players firing capability, and blue squadrons provide an extra life. Sky Shark features 5 different missions; if players complete all 5 missions, the game repeats missions 2 through 5 indefinitely but with an increased level of difficulty.

Product catalogs, magazines, flyers, or other documentation Sky Shark has appeared in.
*Note: If you are unable to see any images in this section, you may have an ad blocker installed that is blocking the thumbnails and/or images.