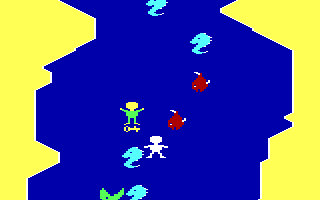 ScubaVenture for the IBM PCjr

ScubaVenture is an action game developed by Gebellli Software and published by IBM for the IBM PCjr. In the game players are diving for treasures! Two players (or one player against the computer) compete to earn as many points as possible by collecting rare fish and opening treasure chests.

ScubaVenture takes place in an underwater cavern shown with a continously, vertically scrolling screen. Each cavern contains several locked treasure chests with the key located elsewhere in the cavern. Each chest takes a different key to unlock; when players swim past a key, it can be picked up and then used to unlock the chest which has a key icon matching the shape of the key being carried. Once all of the chests are unlocked the game proceeds to the next level. The caverns loop; each time players reach the end of the cavern it automatically starts back at the beginning and keeps repeating until the level is completed. In addition to the treasure chests, there are many rare fish in the caverns; collecting them awards bonus points (the rare fish do not need to be collected to complete a level).

Controlling the diver, players need to be sure to avoid the cavern walls and other obstacles that appear. Collisions with poisonous fish, seahorses, electric eels, seaweed, and more will cause the player to lose a life or lose swimming speed. At the very bottom of the screen is a large green eel which is constantly in pursuit; if players swim too slow or a collision with an obstacle pushes the player towards the bottom of the screen the eel will be waiting and cost a life. ScubaVenture can be played by one or two players; in the single player version the second player is computer controlled and becomes an additional obstacle,often getting in the way. 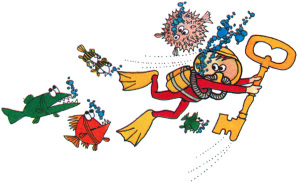 This game has releases with the following standardized packaging styles:
IBM Plastic Case