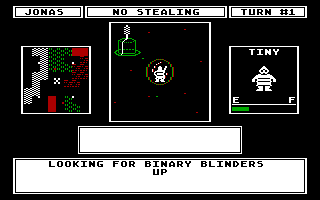 Robot Rascals is a multi-player game resembling a scavenger hunt; It was developed by Ozark Softscape and published by Electronic Arts in 1986 for the Apple II, Commodore 64, and IBM PC/Tandy computers. Combining a computer game with a card game, Robot Rascals has four players controlling a robot with the goal of being the first to locate a set of items which are hidden on a map.

Robot Rascals is played by four players with each player choosing a robot to control. At the start of the game all of the items are randomly hidden on a map which includes various terrains such as swamps, open areas, rocks, and so on. A set of cards is included with the game which are distributed to each player; the cards a player receives indicate which items in the game the player needs to locate. The goal is to be the first player to retrieve all of the items indicated by their cards and return the robot to the home location.

For each turn in the game the player's robot is given a random amount of fuel; this dictates how far a player can move on that turn. The type of terrain a player travels over can also have an affect on the distance travelled with rougher terrain requiring more fuel to cross and even potentially damaging a robot. The items player's are searching for aren't visible on the map; instead, players need to use a scanner which indicates the general direction an item is in and follow the clues. Players can also steal items from other players, either indirectly by finding the item first or directly if the player has no shields and has already acquired the item (players will then need to steal the item back in order to be able to win). Random events can occur throughout the game as well; on each turn additional advantages or disadvantages are provided to each player which can either help or hinder their goal. These include (but are not limited to) faster movement, the ability to teleport or swim, loss of shields, and more. Luck cards can be acquired as well which allow players to swap cards with another player, pass cards to other players, and more.

Robot Rascals includes 10 different robots players can choose from; each robot has slightly different characteristics. Handicapping options are available to allow more experienced players to compete against those with less skill. Three difficulty levels are included which affect how many advantages or disadvantages appear throughout the game, whether or not robots can be damaged, and the number of options available for robots. Multiple players are required for Robot Rascals; the game does not include the option for computer players.