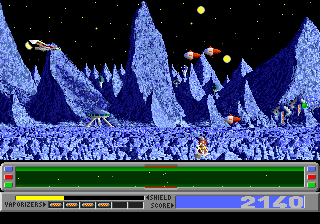 Amiga version of Revenge of Defender

Revenge of Defender (originally released in Europe as StarRay) is a side scrolling shooter developed by Hidden Treasures. The game is an updated version of Williams' arcade classic Defender and expands on the concept with enhanced graphics and sound, new enemies, 7 new level designs, and powerups. Similar to Defender, players control a spaceship which can fly left or right across a horizontally scrolling playfield with the goal of defeating the numerous waves of alian invaders.

Revenge of Defender takes place across the 7 planets of the Scarcanian System. On each planet, there are 10 resource installations; Alien invaders have arrived and are attempting to destroy the installations! The player's goal is to protect the installations and destroy all of the invaders.

The aliens attack in waves; once all of the invaders in a wave are destroyed the game proceeds to the next wave, and after several waves continues on to the next planet. To destroy the aliens, the player's ship (known as the StarRay) is equipped with forward firing lasers and a limited numer of vaporizors which can deal damage to all enemies on the screen at once. On earlier levels all of the enemies can be destroyed by a single shot, however on later levels more difficult opponents appear and it will take several hits before the alien is destroyed. Unlike the original Defender, players are only provided a single life and instead the Starray is equipped with a shield. Each time the ship is hit by enemy fire or comes into contact with an enemy, the shield is depleted a little. Once the shield is completely gone the StarRay is destroyed and the game is over.

There are numerous types of aliens that appear, some of which vary depending on the level. Landers appear on all the planets and serve a similar role as in the original game as they are the only aliens that will be able to destroy the installations. Resembling hot air balloons, they will attempt to land on top of an installation; once a lander has successfully done so, players have a short time to eliminate it before the installation is destroyed. If the landers destroy all 10 installations on any planet, the game is over. Other enemies in the game don't attack the installations, however they still attack the player and need to be eliminated in order to proceed to the next wave in the game.

There are several types of power-ups that can be acquired to help out. When a lander is destroyed, it will occassionally leave behind a bonus coin which can be picked up; depending on the letter displayed, one of the following bonuses will be awarded:

Additionally, in the Amiga and IBM/Tandy versions of the game an airbus will occasionally fly along the top of the screen. Shooting the airbus will cause it to drop it's cargo; if players catch it before it disappears off of the bottom of the playfield they will receive one of several bonuses including 5,000 points, a renewed shield, or an extra vaporizor.