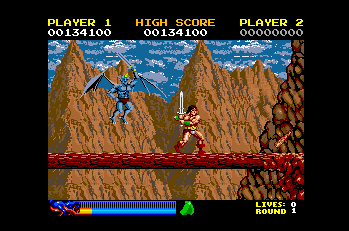 Apple IIgs version of Rastan
Rastan is a side-scrolling action game developed by Taito. It was initially released in arcades in Japan (as Rastan Saga) in 1987 and later released in other regions as well as ported to several home computers and game consoles. In the game players control a barbarian warrior on a quest to slay a dragon; along the way players need to defend themselves from numerous monsters that attack as well as navigate through the (sometimes dangerous) landscapes.

In Rastan players control the titular barbarian warrior. To make their way through the six levels, players can run, jump, and swing weapons (such as a sword) to attack or avoid the numerous enemy creatures that appear. The attacking creatures tend to be fantasy based and include orcs, skeletons, chimeras, valkyries, and more. Players have a health meter indicating how much health for the current life remains; each time Rastan is hit by an opponent, some health is lost. When all health is lost, players lose a life and the game ends when no more lives remain. Additionally, there are some dangers throughout the game which will automatically cost a life regardless of how much health remains (this can include falling into water or being hit by spikes).

Rastan features six levels, and each level consists of three different parts; an outdoor area, a castle area, and a final room where an end of level boss needs to be defeated. Along the way, players can pick up bonus items to help out. Items include improved weapons (a mace, an axe, or a fireball shooting sword), improved armor (a shield, mantle, or body armor), jewels worth bonus points, and potion bottles to restore health. Rastan can only equip one type of armor and use one weapon at a time. Occasionally some items found will be cursed and will cost health instead of providing a power-up.

Product catalogs, magazines, flyers, or other documentation Rastan has appeared in.
*Note: If you are unable to see any images in this section, you may have an ad blocker installed that is blocking the thumbnails and/or images. 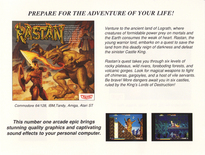