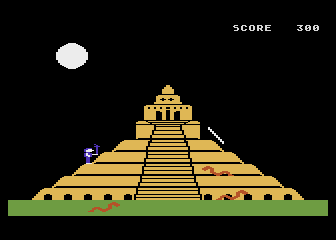 Quest for Quintana Roo is an action game first released by Sunrise Software in 1983. In the game players control Yucatan Sam with the goal of exploring the numerous chambers in the temple of the Mayan god Quintana Roo in search of treasure.

The goal of Quest for Quintana Roo is to locate and unlock a ceremonial vault in the temple in order to collect all of the treasures inside. To open the vault, players will need to locate the five map rocks which are hidden in various rooms throughout the temple.

Players control Yucatan Sam and begin the game outside of the temple and need to safely climb up the sides to the entrance. Numerous snakes and deadly lightning bolts get in the way and cause players to lose a life if caught. Once the entrance is reached, Sam falls down a chute into one of the rooms in the temple. In a temple room, Sam can explore and attempt to find useful artifacts along with the map rocks. Each room has an exit (which is sometimes hidden); the exit can either lead Sam to another, lower room in the temple, or eventually back outside of the temple. Temple rooms can be dangerous as well, with snakes, spiders, and mummies guarding them.

To help out, Sam has several items at his disposal which can be used: this includes a gun (with limited ammo) to shoot snakes and spiders, flasks of acid for destroying mummies and walls, a chisel to open secret door, and a geiger counter which helps locate objects.

There are several time limits in the game. First, the air is stale and Sam can't breathe it for too long so exploring the temple needs to be done by repeatedly entering and exiting it. Should Sam remain inside the temple for more than a minute and a half a life is lost. Additionally, if a snake or a spider bites Sam he will become poisoned. Once poisoned, players have one minute to locate a cure in the form of a magic herb or a life is lost.

If players are successful in their mission, the game provides a secret code which can be used to begin on a later level.

Product catalogs, magazines, flyers, or other documentation Quest for Quintana Roo has appeared in.
*Note: If you are unable to see any images in this section, you may have an ad blocker installed that is blocking the thumbnails and/or images.