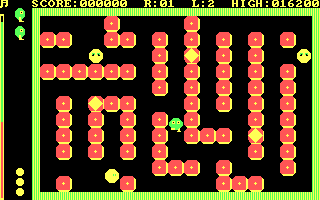 Pango for the IBM PC
Pango is an action game released in 1983 for IBM PC/compatible computers. It is a clone of the arcade game Pengo and the gameplay is very similar. In the game, players controls Pango, a penguin like character, with the goal of clearing an ice maze of all the bees roaming around it within the one minute time limit. The maze consists of numerous ice blocks which Pango can either push around or destroy. The bees are constantly chasing the player throughout the maze and will cause Pango to lose a life if caught. The bees can be eliminated in two ways: they can either be squashed with ice blocks, or if they are near a wall that Pango is kicking the bee will become dazed allowing Pango a short time to squash it. Some of the bees are not initially visible on the screen and are hidden inside an ice block in egg form. If a bee is destroyed, one of the hidden eggs will hatch. However, if the ice block containing the egg is destroyed, then the egg is also destroyed.

In addition to the ice blocks, there are also three diamond blocks. These cannot be destroyed, however if all three of them are lined up next to each other then bonus points are earned. The blocks can be lined up either against a wall or in the middle of the playfield with the latter earning more points.