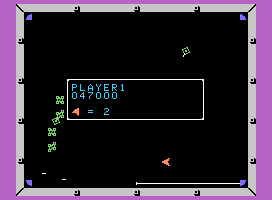 ColecoVision version of Omega Race
Omega Race is an action game originally released in arcades by Midway in 1981 and later ported to several home computers and game consoles. The game takes place in the year 2003 (at the time, far in the future); warriors in the Omegan system regularly take part in the Omega Race, a challenge designed to train and test their ability to defend the Omegans. In the game, players pilot an Omegan spaceship and need to survive the race by destroying all of the various opponents and other obstacles.

The game screen in Omega Race consists of a race track along the borders of the screen with the score displayed in the middle (in some versions, game variations also allow tunnels through the middle of the screen or along the edges). Players control a triangle shaped spaceship; similar to Asteroids, the ship is controlled by rotating either left or right, thrusting forward, and firing. If the ship hits any of the walls along the screen edge or in the middle, it will bounce back into the playfield (again, some home versions offer game variations that change how fast or far the ship bounces after hitting a wall). Avoiding the walls is usually advisable as the player loses control for a short time while the ship recovers.

On each level of the game there are several types of enemy ships with some enemies having the ability to leave mines behind on the track (mines can be shot or simply avoided). To complete the level, all of the opponents need to be destroyed. As players progress through levels, enemies become faster, more aggressive, and more numerous. The goal of Omega Race is to earn as many points as possible (points are awarded for each ship or mine that is shot). Additionally, extra lives are awarded after reaching certain score thresholds (the number of points needed for an extra life can vary depending on the version of the game as well as the game settings).

Product catalogs, magazines, flyers, or other documentation Omega Race has appeared in.
*Note: If you are unable to see any images in this section, you may have an ad blocker installed that is blocking the thumbnails and/or images.