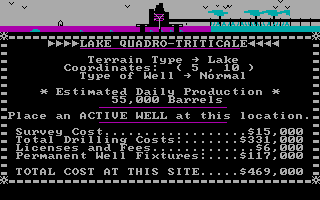 IBM PC version of Oil Barons
Oil Barons is a turn based strategy game for one to eight players. The goal of the game is to accumulate wealth by drilling for oil; players may choose to have the winner of the game either be the first person to accumulate a specified amount of money, or the person with the most money at the end of a certain number of turns. The game is a mixture between a computer game and a board game; Along with the computer game, the package included a large game board with a 50x40 grid on it which represented the lands players may drill in. The game program would keep track of stats for each player, provide some random elements, and indicated where on the board pieces needed to be placed.

Product catalogs, magazines, flyers, or other documentation Oil Barons has appeared in.
*Note: If you are unable to see any images in this section, you may have an ad blocker installed that is blocking the thumbnails and/or images.