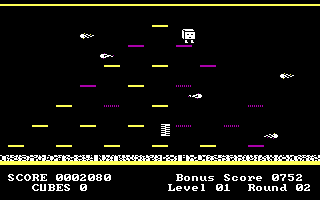 Mr. Cool is an action game by Sierra On-Line released in 1983. The game is a variation of Q*bert; players control Mr. Cool, an ice cube, with the goal of cooling off all of the hot plates on the screen. Fireballs and hot springs are in constant pursuit and will melt Mr. Cool if he's caught.

The game screen in Mr. Cool is very similar to that of Q*bert; the hot plates, represented by horizontal lines, are arranged in a pyramid. Mr. Cool, starting at the top of the pyrmaid, can jump from plate to plate which changes the color; the goal is to change all of the plates to the target color which is indicated by the playfield border. At the start of the game the plates will reach the target color after a single jump, and as the game progresses difficulty increases by requiring more than one jump before the target is reached.

There are, of course, several dangers Mr. Cool needs to avoid. There is a furnace at the very bottom of the screen; Mr. Cool can't jump off of the sides of the pyramid, or he'll melt into the fire. Additionally, fireballs appear from the left and right sides of the screen and travel horizontally to the opposite side at varying speeds. Being hit by a fireball will again cause Mr. Cool to melt. Starting in Round 2, the hot springs appear; the springs appear at the top of the pyramid and bounce their way towards the bottom in random directions. The springs need to be avoided, or a life is lost. The only defense against the latter two opponents is super cool time; when players utilize this limited ability they have 15 seconds where the fireballs turn to snowballs and the springs are rendered harmless; running into the opponents during this time will award bonus points.

Each level in Mr. Cool consists of 15 rounds; after all 15 rounds are completed, the game continues to the next level where the rounds repeat but with increased speed and difficulty. Points are awarded in the game for each hot plate that is jumped on, for absorbing opponents during super cool time, and for completing each round. For every 20,000 points earned a bonus life is awarded.

Product catalogs, magazines, flyers, or other documentation Mr. Cool has appeared in.
*Note: If you are unable to see any images in this section, you may have an ad blocker installed that is blocking the thumbnails and/or images.